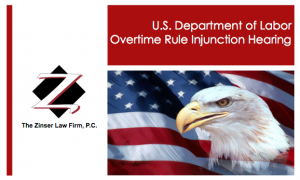 The U.S. District Court for the Eastern District of Texas heard oral arguments on an emergency Motion for a Preliminary Injunction to stop the U.S. Department of Labor’s Overtime Rule, scheduled to take effect on December 1, 2016. The Court heard oral argument from 9:00 a.m. until 12:40 p.m., on November 16, from not only the 21 states that filed suit, but also the business groups that filed a separate suit. The Court took the Motion under advisement and stated that it hopes an initial ruling will be issued on Tuesday, November 22, 2016.

This report comes from noted media attorney Michael Zinser who thought you would want to have this status update.