PMG and Kentucky’s Mike Duncan, USPS Board of Governors chair, to testify Monday

From the Rural Blog 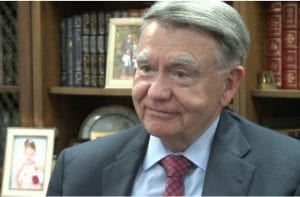 Postmaster General Louis DeJoy and the chair of the board that hired him have agreed to testify before a House committee next week “about his controversial Postal Service changes that have raised hackles around the nation, according to two people familiar with the matter,” reports Daniel Lippman of Politico.

Mike Duncan of Inez, Ky., chairman of the Postal Service Board of Governors, has “also agreed to testify, according to a person familiar with the matter,” Lippman reports. “Duncan is a former chairman of the Republican National Committee,” in 2007-09, after being treasurer and general counsel.

“The Oversight and Reform Committee hearing is likely to be tense, with Democrats loudly objecting to changes that have slowed mail delivery in numerous parts of the country amid President Donald Trump’s calls to restrict the use of mail-in ballots for the November election,” Lippman writes. “A number of Democrats, including moderate House member Rep. Jim Cooper (D-Tenn.), had even said that they wanted DeJoy, a major Republican Party fundraiser, arrested by the House sergeant at arms if he didn’t agree to testify.”

The Democrat-controlled House may vote “as early as this Saturday on a proposal to block DeJoy’s plans to overhaul the Postal Service,” Lippman reports. “The emergency vote would occur weeks earlier than Speaker Nancy Pelosi and other House Democratic leaders had originally planned to return to Washington during the August recess. Both House and Senate Democrats have also demanded reams of documents from DeJoy and senior USPS staffers as they probe why the Postal Service has cracked down on the use of overtime for postal workers, restricted certain deliveries and warned states that if ballots are put in the mail too late, the Postal Service can’t guarantee delivery of them by election day. Even Trump seems to have changed his tune on what he wants from the Postal Service, telling reporters on Monday: “I have encouraged everybody to speed up the mail, not slow the mail.”

2 responses to “PMG and Kentucky’s Mike Duncan, USPS Board of Governors chair, to testify Monday”