Political Advertising is a mountain of money waiting for newspapers 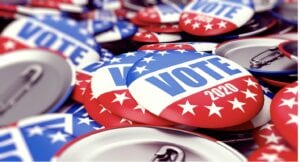 If you look, there are opportunities for newspapers to grow advertising revenue in some categories – not in spite of the COVID-19 health crisis, but because of it. Even as things begin to open up, financial planning, home decorating, landscaping, local home improvement and other types of businesses can take advantage of projects and to-do lists developed as people spent more and more time at home.

But political advertising just might top the list. Estimates range anywhere from $8 billion to as much as $11 billion that will be spent to elect candidates, to advocate for ballot issues, on GOTV (get out the vote) mail flyers and print yard signs. That is a literal mountain of money!

Philip Inghelbrecht, cofounder and CEO of Tatari, said, “History tells us that political advertising spend will not be negatively impacted by the economic downturn. During the Great Recession, which took place during the 2008 election cycle, campaign contributions and expenditures set records, jumping about 40 percent from 2004.”

But some of the normal avenues of political spending will not be available. Candidates cannot run their campaigns as they had planned. Large gatherings, meet-and-greets, even door-to-door canvassing will be practically non-existent. The need to manage campaigns differently is putting candidates in a mad rush to come up with new ideas. They’ve raised the money and need to spend it if they want to win. It brings to mind the old saying, “Everything old is new again…”

That’s where newspapers can increase their share of this growing market – if they address the category with the same aggressiveness that they usually apply to their other advertising clients. Early in the 2002 election season, the News Media Alliance, then the Newspaper Association of America (NAA), started an aggressive initiative to speak to the power of local newspapers in driving voters to the polls. Research was conducted that showed nearly 80 percent of the people who actually go to their voting places identified themselves as regular consumers of newspapers in print and, increasingly, online. Political affiliation made no difference; the numbers were nearly identical for Republicans, Democrats and Independent voters. NAA took this message primarily to the political consultant community, while working with newspapers to educate their sales teams about the category.

Did it work? The newspaper share grew from about $50 million in 2000, to about $450 million by 2008. Newspaper political advertising revenue has continued to grow each election cycle, and by the 2018 mid-term elections, the number had risen to a whopping $850 million.

Now, about those opportunities. Where are they and how do newspapers capitalize on them?  The major political contests – like presidential, senatorial, gubernatorial and congressional – garner the most press attention, but it’s the local candidates and campaigns that have the biggest impact for newspapers. These local races comprise 70 percent of the political action and are key advertising sales for local newspapers, which more often than not have the highest brand recognition and influence in the market.

A 2016 study by the News Media Alliance showed that newspapers reach 75 percent of opinion leaders and early followers in local markets. Meanwhile, local newspapers and their websites reach 64 percent of all registered voters each week. Newspapers can build on that trust in selling their power to deliver voters. With most elections turning on the margins of a few percentage points, candidates cannot afford to ignore their most loyal and regular voters. With the uncertainty and impact of COVID-19, this year more than ever, they will need to make extra efforts to ensure they get out the vote by driving home their campaign messages.

At the same time, many of the local candidates are not professional media buyers. Often their friends and families are helping them with their campaigns. That’s why it is so important to create easy to buy (and easy to sell) packages that incorporate all the “stuff” that newspapers can offer to candidates. These packages, which increase in options as the package cost increases, are simply called Bronze, Silver, Gold and Platinum by many of our clients, and show graphically exactly what is in each package. This allows the candidate and their surrogates to easily see what they are buying and then choose the package that best fits their strategy and budget.

Make sure you include everything you can sell – website placement, geo-targeting, guaranteed day-of-delivery inserts (to grab some of the direct mail money), specialty printing, front page sticky notes, spadea wraps, polybags, voter guides, etc.  Many candidates have also already produced 10- or 15-second commercials for local and cable TV. Include that in your packages as a way to increase the reach of their digital message. Show exactly what these options look like so the candidate can easily see what you can offer.

Digital is important, but it is your digital content that is part of the trusted source assigned to the local newspaper. That has never been truer than in today’s environment where people are looking to their local newspaper to deliver trusted news on the twin health and economic crises. My guess is your online audience has never been larger.

Newspapers should lead with their digital assets, but package them with print and all the other options you offer.

It is imperative that newspapers show how valuable their audience is to the candidates and how easy it can be to speak to them in the single most trusted source of political news and advertising in the market. With eight out of 10 newspaper readers voting in the last two presidential elections, telling that story to local candidates can help them get in front of the people who can propel them to a November win.

Happy Thanksgiving! Stay safe, stay healthyAllison Evans to serve District 2 on KPA Board; she’s a legacy as father served as KPA PresidentWhere’s your vote? We’re in an election for 2021 KPA Vice President