National Newspaper Association celebrated Wednesday the introduction of a bipartisan postal reform bill that it says could point the way to critical changes for the U.S. Postal Service.

The Postal Service Reform Act is expected to be moved quickly this week through the House Committee on Oversight and Reform.  It would mandate certain changes that NNA has championed for more than a decade, including integration of the full USPS retiree force into Medicare benefits, which should lower the financial burden on mailers over time.  It also prevents USPS from setting up a separate system for delivering packages, so that the volume and revenue benefits from the anticipated growth in parcel delivery will help to stabilize the system for all users. 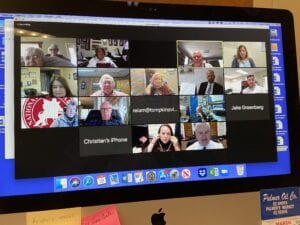 The bill also includes the Rural Newspaper Sustainability provision, championed by Rep. James Comer, R-Kentucky, which would allow “Within County” newspapers to increase their use of a sample copy allowance in current law from 10 percent of their annual “Within County” distribution to 50 percent. The increase has also been long sought by NNA.

Newspapers in Rep. Comer’s District 1 met with the Congressman via Zoom on March 18 and requested the sample copy increase fro 10 percent to the new 50 percent level. Rep. Comer and his staff were receptive and seemingly committed to the Congressman including the language in the Postal Reform Act.

The bill omits some provisions NNA has supported in the past, such as specific measurement of on-time rural mail delivery. But it adds in provisions requiring USPS to provide a website where any person could look up a specific address to determine service performance to that address. It is not yet clear how such a tool could work.  Congress would expect USPS to work out the details, if the bill is adopted.

“This bill does not give us everything we want, nor one thing we really need, which is some assurance of postage rate stability,” Wesner said. “But it does open the door for much-needed postal reform and it sets us on a path for refinements as a bill moves through Congress.  What is most important to us is that Congress ACTS and ACTS QUICKLY to shore up universal service. The very real effects of the delays on Capitol Hill are being felt in our business, as we lose subscribers to poor service and we are forced to  recognize that the mail system has become much less dependable than in the past. To the extent this deterioration is because of USPS’s financial weakness, it is incumbent upon Congress to get moving to help fix it.”

Wesner expressed NNA’s thanks to the intellectual powers behind the bill draft, including Reps. Carolyn Maloney, D-New York, as well as Comer, R-Kentucky, and their staffs.  Reps. Gerald Connolly, D-Virginia, and Virginia Foxx, R-North Carolina, have also been driving forces for getting the bill to come together.

“Hooray! The process is finally underway after a too-long delay in Congress,” Wesner said. “The bill can be improved, and we will keep working on it. For now, we are happy to see progress.”

The sponsors’ note on introduction of the bill is here:  https://oversight.house.gov/news/press-releases/chairwoman-maloney-ranking-member-comer-introduce-bipartisan-postal-reform