publishing print AND digital paid circulation as one in the directory,

extending deadline for students to apply for KPA/KJF internships 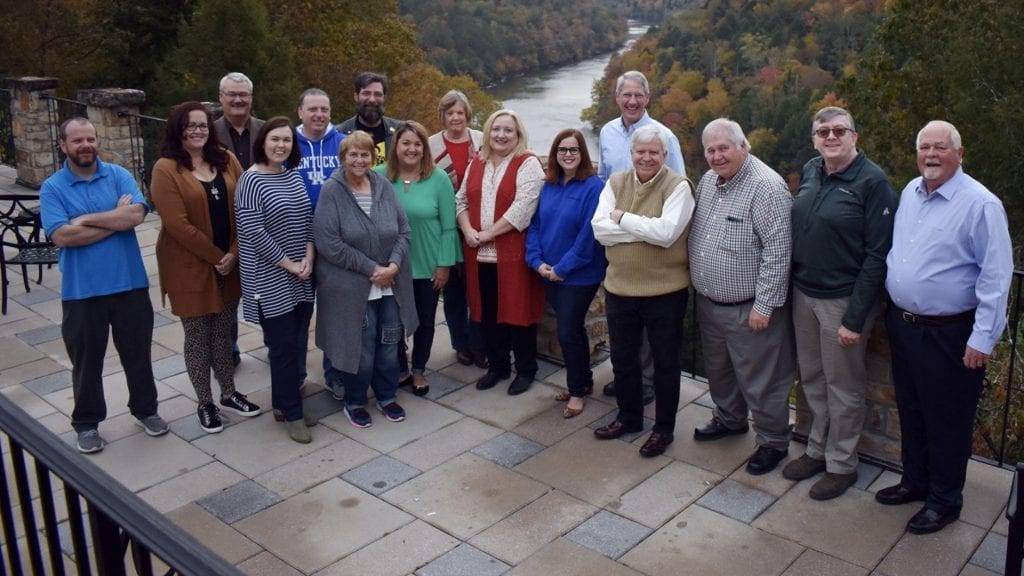 KPA Board members gathered outside the Cumberland Falls State Park lodge before starting the Friday, October 25 meeting. At least six members were not present for the photo as it remains the largest state press association Board in the country. Photo by Teresa Revlett.

The Kentucky Press Association Board of Directors meets four times a year and for three of those meetings it’s pretty much grab a quick bite, talk about KPA/KPS business for two hours and head back home or to the office.  Often times, the agenda features a couple of  “deep discussions” and the rest of the time is just updating the Board on what’s happening in and around KPA/KPS.

A quarter of a century ago, KPA set up a Fall Board Retreat, time spent over two days for Board members to get to know each other better and to spend time talking in-depth about KPA and KPS, its services and its future.

October 24-25, the Board Retreat was held at Cumberland Falls State Park. That’s the third visit to Cumberland Falls since the retreat was started back in 1994. Most have been held at state parks but also at Boone Tavern, a Hilton Inn in Lexington, Green Turtle Bay in western Kentucky and an Embassy Suites in Covington. The schedule usually allows for a full afternoon of discussions on Thursday, a dinner on-site, and then finishing up Friday with another half-day on finances, budgeting, elections/nominations for Treasurer and Vice President and looking ahead to the following year.

Over the next few weeks, you’ll be reading about some of the actions the Board took during the 2019 Fall Retreat. Some actions will be in place soon, some will require votes for member newspapers.

• because of a reduction of staff over the last several months, authorized KPA to rent part or all of the basement office space that’s basically unused except for a conference room and for storage;

• developing a proposal to be presented at the 2020 KPA Convention Board meeting that could allow online newspapers to be full, voting members of the Kentucky Press Association;

• publishing each member’s full paid circulation in the directory beginning in 2020. This will include print paid subscribers as well as digital/online subscribers. For newspapers without an online paid presence, KPA will use line 15-C, left-hand column on the Statement of Ownership but will use the total on line 16b to for those with a print and online product.

• changing the provider of staff health insurance coverage and reducing the KPS contribution to each staff member’s retirement account;

• elected Carrie Dillard as 2020 Treasurer and nominated Dennis Brown and Regina Catlett to the membership for Vice President. An election will be in process in the near future to elect one of the two candidates. Publishers/general managers of each full member newspaper will receive a letter and ballot in the near future and asked to cast their vote by early December.

Students will have until end of February to apply for a KPA internship — Since its inception in 1993, the deadlines for students and potential host newspapers to apply through the KPA/Kentucky Journalism Foundation internship have just about mirrored each other. Doing so allowed the Host Newspapers to be selected by the KPA Past Presidents at the Winter Convention, and soon thereafter begin the process of interviewing students for the 10-week internship that summer.

The colleges/universities claim students want to know what newspapers are going to have interns before they decide to apply and that should lead to more than a handful of students applying for $4,000 for 10 weeks of interning at a newspaper.

The board voted to make the student application deadline “the last Friday in February” meaning the student deadline to apply is more than a month after Host Newspapers are selected.