By Aaron Snyder, The Daily Independent 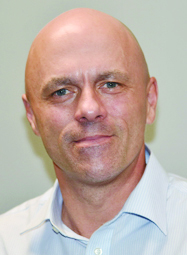 Glenn Puit isn’t shy about what he envisions for The Daily Independent.

The 47-year-old journalist, author and former college instructor just completed a 900-mile haul from McAlester, Oklahoma, as he prepared to tackle his next adventure.

All of it paved the path for Puit (pronounced pew-it), who started his first job in journalism with the Florence Morning News (Oklahoma) in 1994.

Puit, an Indiana State University alumnus, has racked up a stable of awards over the years.

Most recently, Puit spent nearly three years as the executive editor of the McAlester News-Capital, a 4,500-circulation newspaper in southeast Oklahoma. He simultaneously served as interim editor of the Ada News (a 5,500 paper) since February 2016.

The 14-hour trip to Ashland came as a result of accepting the position in early July. He finished out the month in the Sooner State.

“I’m not one of those people who gives my notice and says, ‘Good luck, I’m outta here,’” Puit said on Wednesday. “That being said, I can’t wait to get there.”

Puit stressed the power of journalism.

“I believe in the ability of local newspapers to serve their community and better people’s lives,” Puit said. “That has been my belief since the day I started and I continue to believe it today. I witness it every day in action.”

“Protecting the taxpayer is at the top of the list when it comes to priorities,” he said. “There’ll be a lot of stories about budgets, public money and, to some degree, watchdog reporting. … I’m all about efficiency at newspapers.”

“I am looking forward to having Glenn join our team,” Blakeley said. “He has a wealth of experience and I am confident he can improve on all the good work that has been done before him.”

Puit called working in the newspaper industry “a public service.”

“Every day is important,” Puit said. “Every day we’re going to come to work and do what’s right and try to help people in the communities. I take it very seriously. I wouldn’t still be in this business if I didn’t.”

In McAlester, Puit and staff took home the prestigious Sigma Delta Chi Public Service award from the Society of Professional Journalists’ national chapter in June 2016. The newspaper dug into spending practices and other concerns at the administrative offices of McAlester Public Schools under a previous administration. The staff received the honor in Washington, D.C.

The Sigma Delta Chi is just one of 14 accolades Puit’s been a part of collecting since 2015.

Puit was a senior reporter for the Las Vegas Review-Journal from 1996 to 2007. His beats included investigative, state district courts, federal courts, violent crime and police.

Puit has also worked for the Traverse City Record-Eagle (Michigan). He’s an author of five books through Berkley Books. He specializes in true crime novels. He’s also taught journalism at the University of Nevada Las Vegas (UNLV) — from 2004-06.

Puit said The Daily Independent is already a highly regarded newspaper, but he’s perfectly fine with hoisting the standards.

“We’re going to be a great newspaper and we’re going to do it the right way,” Puit said. “People will know The Daily Independent as an incredible asset for the community.”