Public Notice bill may be in the works; Police Body Cam legislation filed with KPA’s support 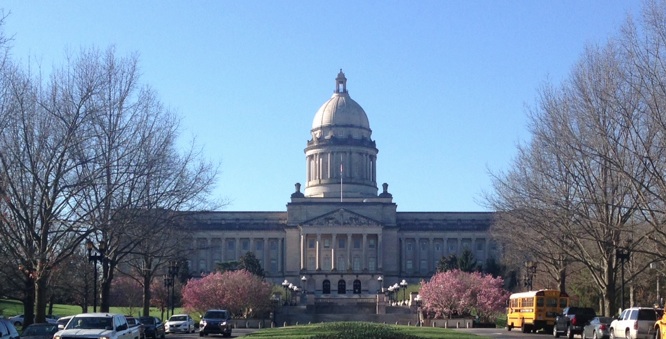 The 2018 Kentucky General Assembly reached its halfway point this week and today marks the 32nd day of the 60-day session. The 2018 session is scheduled to end Friday, April 13.

So far, there have been several bills KPA has monitored but none that have required a lot of lobbying.

That could be changing. There’s a 50-50 chance that Rep. Kenny Imes, R-Murray, will be filing a bill on public notice advertising next week, the first public notice bill of the 2018 session. I say 50-50 because he’s apparently on the fence as to whether he will file something or not. He told our lobbyist Leigh Ann Thacker he was “thinking” about filing one next week, pointing out that the City of Murray spent $10,000 last year on public notices and Calloway County spent $12,000. Neither amount has been verified and chances are the totals, if accurate, include more than just public notices. Another lobbyist familiar with the previous public notice legislation said, “Maybe,” when asked if any public notice bills were in the works. “But the sponsor has not yet made of his mind if he’ll file it or not.”

Rep. Imes is a member of the House Local Government Committee so we would expect the bill to go to that committee if in fact he files it. He is retiring after this session to run for Calloway County Judge Executive. There is no bill number yet since the legislation has not been filed but if it is, we’ll notify all members as to the bill number and the members of the committee.

(Just announced: The House of Representatives has assigned House Bill 373 to the House Judiciary Committee.)

HOUSE BILL 373 — One bill that was filed this week is about an issue we’ve fought the last two sessions. But this time, we’re supporting it because it includes language submitted by KPA.

Several months ago, KPA gave the League of Cities language that would clarify release of the footage is governed by the Open Records law. The league, the police chiefs and Rep. Benvenuti have agreed to the language and incorporated it into the bill. So KPA is supporting House Bill 373.

A copy of HB 373 is attached but here is the language offered by KPA this is included (on page 4) and eliminates our opposition to previous versions. It requires that the Open Records law be the determining source on whether the footage is to be released or not:

(5) If the recording contains video or audio footage that:

(a) Depicts an encounter between a public safety officer where there is a use of force, the disclosure of the record shall be governed solely by the provisions of KRS 61.870 to 61.884;

(b) Depicts an incident which leads to the detention or arrest of an individual or individuals, the disclosure of the record shall be governed solely by the provisions of KRS 61.870 to 61.884;

(e) Is requested by a person or other entity or the personal representative of a person or entity that is directly involved in the incident contained in the body-worn camera recording, it shall be made available by the public agency to the requesting party for viewing on the premises of the public agency but no copies shall be made. The requesting parties shall not be limited in the number of times they may view the recording under this paragraph.

(6) Nothing in this section shall be interpreted to override any provision related to:

(a) Reports by law enforcement officers and criminal justice agencies under KRS 17.150; or

(b) The law and rules governing discovery in either criminal or civil litigation, or in any administrative proceeding.