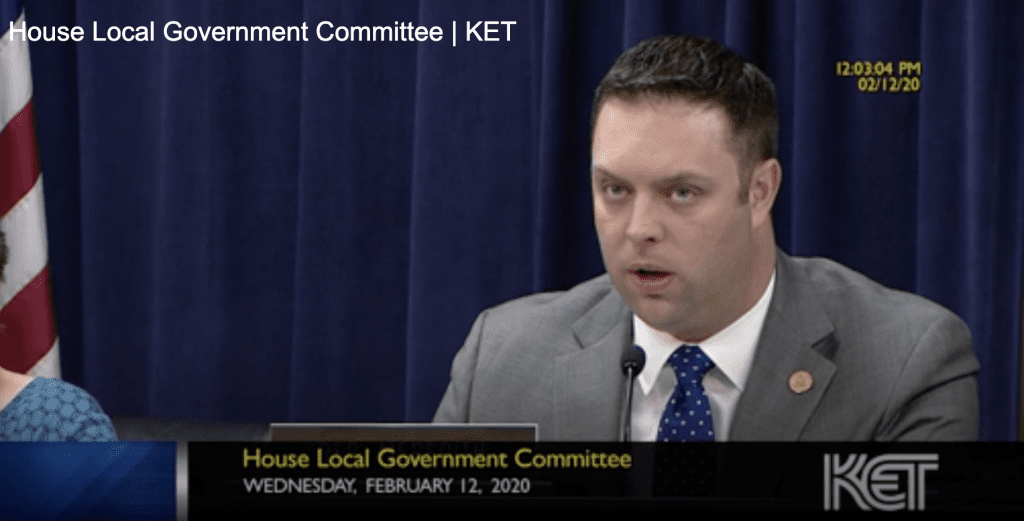 (Editor’s Note: To view the House Local Government proceedings from Wednesday, February 12, click on the link at the bottom of this article. To view only the portion dealing with Public Notice advertising, scroll the time bar to 29:30. That portion is about 30 minutes.)

House Bill 195, the legislation as introduced that would have taken most every public notice away from newspapers, was before the House Local Government Committee on Wednesday. A committee substitute for HB 195, worked on by KPA, the Kentucky League of Cities and Kentucky Association of Counties, took the place of the original bill. Rep. Jerry Miller, R-Louisville, remained as sponsor of the revised version.

As amended, the language would apply only to counties with a population of 80,000 or more, based on the 2020 Kentucky census. Based on the most recent census figures, the bill would apply to Jefferson, Fayette, Boone, Kenton, Campbell, Daviess, Warren, Hardin, Madison and Bullitt counties. For all other counties, there is no change from current law.

The 80,000 population is taken from current language that expires with the biennial budget expires, on June 30, 2020. As amended in the Senate for the two-year budget, the population was set at 90,000. The population threshold was discussed extensively before other groups who wanted lower population amounts but who finally accepted KPA’s compromise of 80,000,

Rep. Stan Lee, R-Lexington, noted that he hadn’t been contacted by any newspaper, “Probably because I’ve introduced legislation about public notices several times.” He said he favors the original bill to take all public notices away from newspapers and that the committee should remember the only special interest members are serving are the local taxpayers. Representative Lee announced earlier in the session that he would not be seeking re-election for another term.

You can hear the presentation and comments supporting local newspapers by accessing the Legislative Archives link below. Scroll the time bar over to 29:30 when Representative Miller begins discussing the bill. After the presentation, Chairman Rep. Michael Meredith opens the floor to comments by the members. You can hear the support for the local community newspapers by Rep. Joe Graviss, Rep. Danny Bentley, Rep. Jerry Donohue, (from Louisville) and others.

At the end, Chairman Meredith takes the roll call vote. All of the members present voted in favor of House Bill 195 as amended. It now heads to the full House and could be heard Tuesday. No House Bills were considered for passage on Friday by the full House. Monday is a non-legislative day because of Presidents’ Day so Tuesday is the next day for any action on HB 195. If it passes the House, then it’s on to the Senate.

Double-click on this link then on the left-hand side, scroll down to House Local Government Committee. Click on that and the video will begin. Use the time bar at the bottom to scroll over to 29:30 when discussion on House Bill 195 begins.