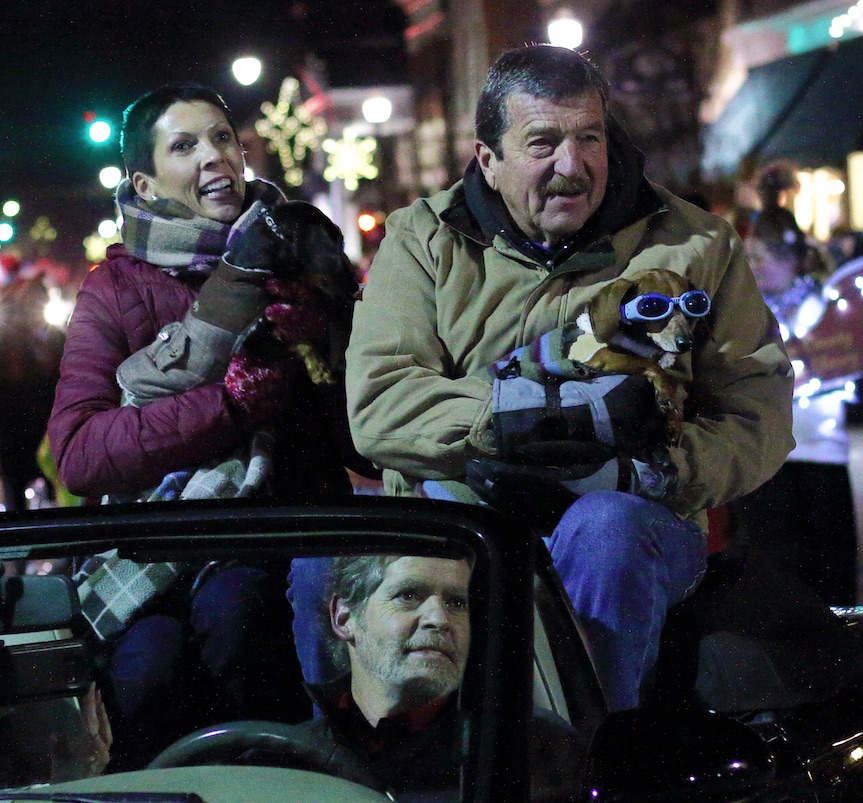 The Grand Marshals of the 2017 Bardstown Christmas Parade were Kentucky’s famous Woody and Chloe who are the stars of  Fall Chapter Series projects for Kentucky newspapers. Author Leigh Ann Florence, holding Woody, and husband Ron, holding Chloe, braved the cold to make sure children had the opportunity to see and visit with Woody and Chloe Thursday night. Photo by Kacie Goode Emmerson, The Kentucky Standard.

Christmas in Bardstown is going to the dogs — in a good way.

They are the stars of her books, and thus represent this year’s parade theme, “A Storybook Christmas.”

“Woody is the grand marshal, and I’m going to ride on his coattails,” Florence told PLG TV-13 in an on-camera interview with the dachshund a few days ago. At the time, his sidekick was in the kennel napping because she had been yapping in the studio. But the two can bark all they want in the parade.

The canine characters are featured in Florence’s book series, which includes “Tails from the Bluegrass” and its sequel; a history lesson, “Mr. Dogwood Goes to Washington,” “Woody the Kentucky Wiener: The Adoption,” and four others.

They are also featured in a Kentucky Press Association newspaper series published for 10 weeks every fall in community newspapers around the state, including The Kentucky Standard.

The Standard also sells the books in its front lobby.

“We are so thankful” to be asked to lead the parade, Florence said.

Bardstown has a special place in the hearts of Leigh Anne and her husband, Ron Florence, who is originally from nearby Nelsonville and attended the Old Kentucky Home School back in the day. She’s from Murray and graduated from Murray State University. They recently moved to Danville from Shepherdsville, where they lived the last 17 years and the books were published by Hot Diggety Dog Press.

Nelson County figures prominently in the dog tails … er, tales, as well as in their personal story.

“Woody and Chloe see a whole lot of kids every week in schools, and Bardstown’s one of their favorite places to come,” Florence said.

“I capture the adventures of Woody and Chloe … very well-known dogs around the Bluegrass State,” she said, and those adventures “come right through Bardstown.”

Illustrations by artist James Asher in “Tails from the Bluegrass II” show the dogs beside my Old Kentucky Dinner Train and riding a carriage in front of My Old Kentucky Home. Wickland, St. Joseph Cathedral and the Old Talbott Tavern also get mentions.

“No matter how long we do this, we’re very amazed” by the response, Florence said. “We’ve just been given a great opportunity. … We meet a lot of people and make a lot of connections and a lot of friends.”

The Florences and their little canine family members will be around downtown before and after the parade and will have books available.

“Even if you don’t need a book, come meet us. Come say hi to Woody and get your picture made,” Florence said.

The parade, sponsored by WBRT radio, which will also have the dogs and Florence on the air, is set to begin at 6 p.m. next Thursday. It will begin at the corner of Fifth and Broadway, then proceed down Broadway and North Third Street to the Welcome Center and finish by the same route as in years past.

The storybook theme will be used by some of the floats in the parade and in entertainment by the Nelson County Public Library and singer Mary Kutter.