Rand Paul vs. Google, Facebook; co-sponsorship could help bill move through the Senate 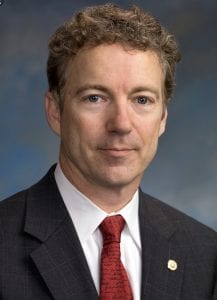 Kentucky senator Rand Paul is signing on to a bill attempting to help a struggling industry, print and digital news organizations, by giving them more power to negotiate the terms under which Google and Facebook may distribute their content.

Current antitrust law forbids news organizations from banding together to negotiate terms of distribution and advertising rates, but the Journalism Competition and Preservation Act would provide a four-year exemption to existing antitrust laws for “news content creators” to collectively negotiate with “online content distributors” that have at least one billion active users each month (i.e., Google and Facebook). “Government threatens the viability of trusted news sources through old and outdated restrictions on the ability of those sources to survive in an evolving media environment,” Paul said in a written statement Monday to National Review. “We need to get government out of the way, which is why in addition to cosponsoring the Journalism Competition and Preservation Act of 2019, I will also be introducing legislation to free broadcast media from the chains that restrict their ability to better serve their customers.”

The bill is backed by the News Media Alliance, a trade association representing more than 2,000 newspapers, and it has bipartisan cosponsors (Louisiana Republican senators Bill Cassidy and John Kennedy as well as Democratic senators Amy Klobuchar of Minnesota and Dick Durbin of Illinois). The libertarian Paul provides a boost of support for the bill on the right.

Over the last few years, big-tech companies have drawn increasing scrutiny from both the Left and the Right. Missouri GOP senator Josh Hawley wants the federal government to ensure that social-media companies aren’t politically biased against users. Democratic senator Elizabeth Warren is calling for Facebook, Google, Amazon, and Apple to be broken up.

The Journalism Competition and Preservation Act, while far less aggressive than Warren’s call to bust up big tech, raises interesting questions for supporters of a free market. “Speaking very generally, antitrust law protects us from two possible anti-market harms: the harm of big companies leveraging their power to protect themselves from competition; and the harm of smaller companies colluding to protect themselves from competition,” says Adam White, a legal scholar at the American Enterprise Institute, who has written in depth on the challenges Google presents. “If Internet platforms do have something approaching monopolistic power in advertising markets, then the lesser evil might be to let publishers band together to negotiate collectively with Google and Facebook.”

The Google-Facebook duopoly currently accounts for about 60 percent of all online digital advertising. The number of newspaper newsroom employees in the United States dropped from 71,000 to 38,000 — nearly a 50 percent decline — between 2008 and 2018 as the Internet disrupted the advertising model for newspapers. While large newspapers such as the New York Times, the Washington Post, and the Wall Street Journal have found success with digital subscriptions, many smaller newspapers have not.

Carl Szabo, vice president of NetChoice, a trade association whose members include Google and Facebook, panned the bill as a “special handout” to the news industry and argued that the legislation, despite its intent, could still leave smaller newspapers “out in the cold.”

“What’s concerning about legislation like this is it’s pretty much designed to empower large newspaper conglomerates to circumvent existing anti-trust law,” Szabo tells National Review. “Today, businesses regardless of what industry they’re in are subject to the same rules when it comes to concerns about size and anti-trust. This [bill] is giving a special handout to the news industry, and it’s hard to argue that Rupert Murdoch needs yet another handout.”

Although the 500-word bill states that the negotiations that news companies engage in with Google and Facebook must “pertain to terms that would be available to all news content creators,” Szabo suggested it could still benefit big papers over small ones: “Let’s presume I’m an online company [such as Google or Facebook], and I have to cut this nice sweetheart deal because the New York Times, the Wall Street Journal, the Washington Post, and the LA Times have decided to get together and hard bargain negotiated rates. Let’s say the Kansas City Tribune [sic] wants to enjoy that. The online service provider might say, ‘Look, I won’t carry your content because it’s just not going to be worth it to me.’”

David Chavern, president of the News Media Alliance, responded that if the bill is enacted “the public will continue to value local news and tech giants will still have an incentive to distribute it — but will have to reach terms that also allow the news publishers to continue to provide it in the first place.” Small newspapers see the legislation as one of their better options to survive in the new digital age.

The bill was first introduced earlier this year, and a vote isn’t pending in either the House or the Senate before the end of 2019, but Paul’s support makes movement on the legislation more likely in 2020.