Recycling a KPA Past President, Dave Eldridge to represent District 14 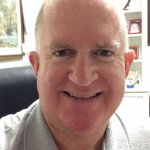 Saying he apparently is a “glutton for punishment,” KPA Past President Dave Eldridge let his name be put in nomination to represent District 14 on the KPA Board of Directors.

District 14 was in a Special Election process following the resignation of Larry Hensley, publisher of The Advocate Messenger in Danville. Hensley resigned from the board to return to Indiana to work for Schurz Communications. Eldridge, who served as President of KPA in 2002, allowed his name to be put in nomination after another nominee had said he would not be able to serve if elected. So the nomination deadline was extended, Eldridge was nominated, and being the only nominee, was automatically elected to complete the District 14 term.

That term will expire in January, 2019, and there will be an election for a full, three-year term at that time.

Dave is publisher of the Richmond Register, London Sentinel Echo and Corbin Times-Tribune. All three are CNHI newspapers located along I-75.