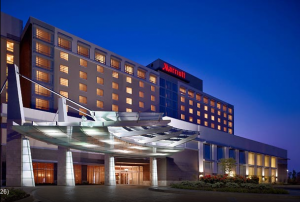 The Marriott East Hotel, just off Hurstbourne Lane and I-64 in Louisville is the host facility for the 2019 KPA Convention.

If you haven’t made your room reservations for the 150th Anniversary Convention, then now is the time. Rooms are available at the Marriott East in Louisville, site of the convention, with a deadline of January 8 approaching. After that date, the hotel will release KPA’s block of rooms to the general public and will also charge full price for the rooms instead of the discounted rate KPA has negotiated.

The last time we had the convention at the Marriott East, several KPA members had to find accommodations at other nearby hotels because they waited past the deadline and the hotel was sold out.

Don’t do that. Avoid the hassle and make the reservations now!! You can do that by going to www.kypress.com and clicking on the 2019 Convention link at the top. While you’re on that link, go ahead and get registered for the convention. And then purchase your copy/copies of “Still, We Speak,” as we celebrate the first 150 years through the words of John Nelson.