Rufus Friday, the Herald-Leader’s president and publisher since 2011, announced on Wednesday that he will be stepping down in the middle of September.

Editor Peter Baniak will move into an expanded role as the Herald-Leader’s editor and general manager.

Friday announced his departure at a Wednesday morning staff meeting, along with Alexandra Villoch, East Region Publisher for McClatchy, the Herald-Leader’s parent company.

“I have been extremely blessed and fortunate in my 33 plus years in the industry,” Friday said in an email to the staff. “It has been an exciting time filled with many changes, challenges and rewards in transforming our news and information business in the digital age.

“I’ve enjoyed leading talented teams that have been committed to our public service journalism mission and working with leaders in the community that were passionate about improving the quality of place.” 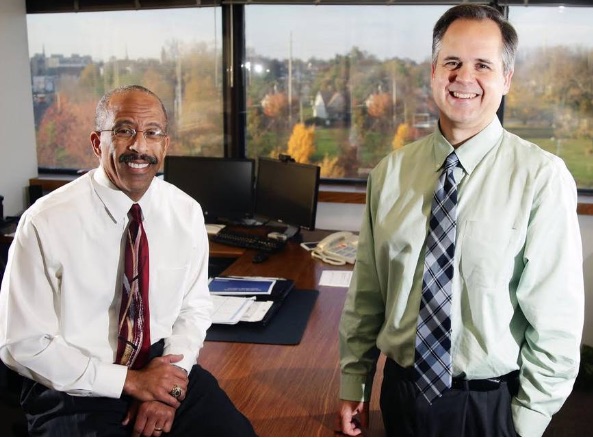 Friday has led the Herald-Leader through a time of challenges and digital transformation in the nation’s news media.

In his time as publisher, the Herald-Leader has expanded its digital footprint, and its journalists have won numerous awards for excellence, including winning first place for General Excellence among large newspapers in the Kentucky Press Association’s Excellence in Kentucky Newspaper’s awards this year. The newspaper has also won several McClatchy President’s Awards, the company’s top honor for journalism excellence.

He has been active in the community and spearheaded the Together Lexington project, an initiative to create a positive community marketing campaign and secure funding for legacy projects from a group of business and community leaders.

Last year, Friday announced a deal to sell the Herald-Leader’s downtown building, which has since been proposed as a site for a new city hall by developer Craig Turner. The Urban County Council held a public hearing on that proposal Tuesday night.

Friday has been in the news business for more than 30 years, including 15 with McClatchy. Prior to taking the lead at the Herald-Leader, he was vice president of circulation at the News & Observer in Raleigh, N.C., and president and publisher of the Tri-City Herald in Washington state.

Friday will be pursuing other opportunities in the Lexington area. He will be in his position as publisher until Sept. 14.

“Even in the toughest of times, his focus has always been on what’s best for the Herald-Leader and this community,” Baniak said of Friday. “Above all, he has been a steadfast advocate for our journalism.”

Baniak, 46, who will now oversee all Herald-Leader operations, joined the newspaper as city hall reporter in 1995, after having originally interned in the newsroom. He has served as editor and vice president of the Herald-Leader since 2009.

He is currently president of the Kentucky Press Association and lives in Lexington.

“It’s been my good fortune to work with the Herald-Leader’s talented and dedicated team of journalists every day for more than two decades,” Baniak said. “I look forward to continuing that work, and working even more closely with other parts of the company.

“The road ahead is not an easy one, but the mission is critical. The need for local accountability journalism has never been greater.”