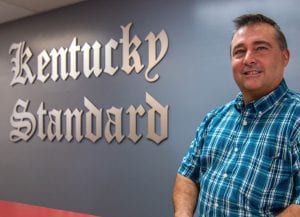 Scott Moore has been named the new publisher of The Kentucky Standard following the retirement of Jamie Sizemore.

Moore was announced as the new publisher in late June. He replaced Jamie Sizemore, who has served as publisher for 10 years.

“I am excited to start this new chapter of my life and come back to Bardstown,” Moore said.

Moore has been publisher of The Sentinel-News in Shelbyville since May 2015. He took the top job at the twice-weekly paper after he spent nearly four years as The Standard’s advertising director.

While Moore was in Shelbyville he also assumed publisher responsibility for The Spencer Magnet in Taylorsville, as well as management of Landmark’s Louisville sales team.

As publisher of The Standard, Moore will retain his regional management for Louisville sales and The Magnet, as well as regional supervision of The Lebanon Enterprise.

Moore is a native of Louisville and graduated from the University of Louisville with a degree in business management and minor in physical education. He has five children ranging in age from 13 to 25.

Sizemore said she could not have picked a better successor.

“Scott knows the community and knows this market,” she said. “Bardstown is a special place and The Standard is a special newspaper. He will serve our readers and our clients well.”