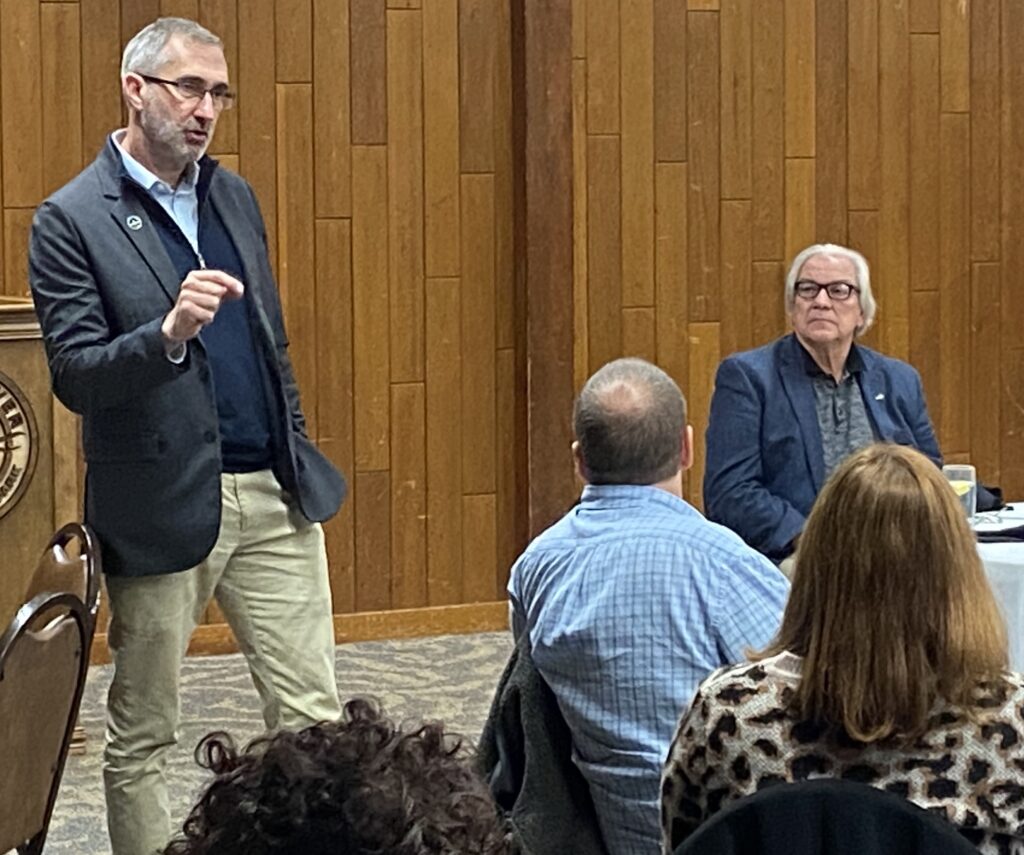 Senate President Pro Tem David Givens spoke to members of the Kentucky Press Association Board of Directors during the group’s Fall Board Retreat November 4-5 at Barren River State Park. Shown at the right is Glasgow Mayor Harold Armstrong who welcomed the Board to Glasgow and talked about the importance of the press is to the American society.

The Kentucky Press Association (KPA) held its annual fall retreat in Glasgow this past week.

Members representing the more than 150 newspapers and new online affiliate websites were hosted by the local newspaper, The Barren County Progress, at the Barren River Lake State Park.

The location of the annual event is the choice of the sitting President of the organization, and this event was suggested by last year’s President Jeff Jobe.

Jobe had been elected to serve on the board for 18 years and held the positions of Vice President and President.  Now that his term is over, he will move into the Chairman position of past presidents.

Jobe introduced Mayor Harold Armstrong as a hardworking mayor, not at all timid about making his views known.

Mayor Armstrong welcomed the full Board at a dinner inside the Louie B. Nunn banquet room.  Armstrong spoke of how important the work of a free press is to our society and all Americans, whether it is local small communities or the nation as a whole.

“The past few years have been difficult on all businesses, including newspapers and with the loss of newspapers, any community with their own newspaper is very blessed,” Armstrong said. “…Trustworthy news and updates of the pandemic were appreciated by all.”

Armstrong spoke of how important it is to have a good working relationship with the local newspaper, and all communities need a relationship like Glasgow has with BCP publisher Jeff Jobe.

“You don’t have to agree on all this issues as long as you know even if you don’t, the facts and views of anyone wanting to share them will be reported,” Armstrong said.

“I’ll be the first to report that none of us have all the facts on all the subjects, so having legislators that you trust is essential,” Jobe said. “Senator Givens is a legislator you can trust to represent our views in all his votes.”

Senator Givens was the featured guest of the dinner meeting and took questions from members about issues regarding openness and the First Amendment.

“Grass roots efforts begin with relationships and knowing your legislators by name and them knowing local newspaper people by name is important to getting the facts right,” Givens said.

The KPA is an organization celebrating 152 years, and in the May 1878 issue of the Glasgow Weekly it was reported that members of the association attended this same type meeting in Hopkinsville.

Jobe said, “It has been an honor to serve, and I take great pride in sharing my home, our Mayor, and our Senator with the members of this organization.”