Senate leadership to get taste of sales tax on golf

Luther Conley and his son, Steven, have two golf courses in Georgetown.

One, Cherry Blossom, near the Toyota plant, is a country club in an upscale subdivision. It is membership-based but also is open to the public and has been home to some pro circuit tournaments such as the Hooter’s Tour.

The other, Longview, is Scott County’s oldest golf course, dating back to the early 1970s or so. It’s a “Stay and Play” operation where golfers can rent units along the golf course and stay there while playing Longview or Cherry Blossom on extended vacations.

Monday morning, Luther got a text that the Senate and House Free Conference Committee had just mentioned putting a state sales tax on golf course green fees and country club memberships. Like everyone else, Luther was caught off guard. He questioned if that was just being discussed or was going to happen.

Told it was going to be part of the committee’s final version of House Bill 366, along with several other services, Luther responded, “It’s going to hurt. Golf is already struggling and then put this weather in the mix of this and it will be devastating.” Weather the last few weeks has not been conducive to golfers and without paid green fees, golf courses don’t make any money. 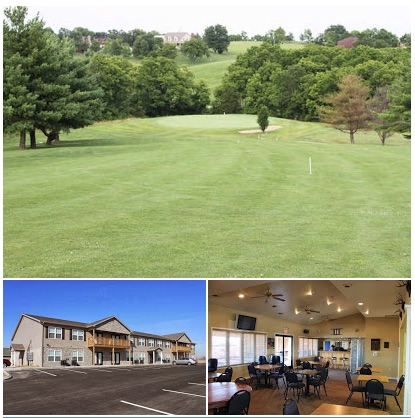 Longview Golf Course in Georgetown not only has golf but also “Stay and Play” where golfers can rent units on the course for extended vacations.

In the Conleys’ case, the legislature’s proposal is a three-strike proposition.

Not only will golfers be charged the six percent on their green fees but with Longview as a “Stay and Play,” the Conleys will have to pay the state sales tax on cleaning the units (the legislature is putting janitorial services as one of the 17 to be taxed) and also on laundry services. Sheets and towels have to be cleaned. Since he has his own groundskeeping staff, he won’t have to pay the sales tax on landscaping services except for a contractor that removes snow from the parking lots and roads leading into the golf courses.

Luther said he had talked with some other golf pros in the area and all are concerned what effect the sales tax on the fees and country club memberships will have on them. In fact, the Kentucky Golf Association has sent a letter to all of its members, alerting them to the sales tax and what this would mean to their operations. KGA has drafted a letter, entitled No New Taxes on Golf, and has sent that draft to all its members along with the email address of Governor Matt Bevin, and all legislators.

But the golf courses and country clubs may not have much time to prepare for assessing the sales tax and then remitting that to the state. The legislature put an “Emergency Clause” provision on House Bill 366, meaning that as soon as the governor signs the bill, if he does, the legislation goes into effect. Most legislation passed during the 2018 session won’t become effective until mid-July, but with the “emergency clause” legislation is immediate.

In the Cherry Blossom case, the Conleys might get the last laugh. The Senate leadership has an annual golf outing at the Georgetown course on June 15. It’s a fund-raising event for the Senate Majority Trust. They are charging $750 per golfer or $3,350 for a foursome, plus asking for sponsorships ranging up to $10,000.