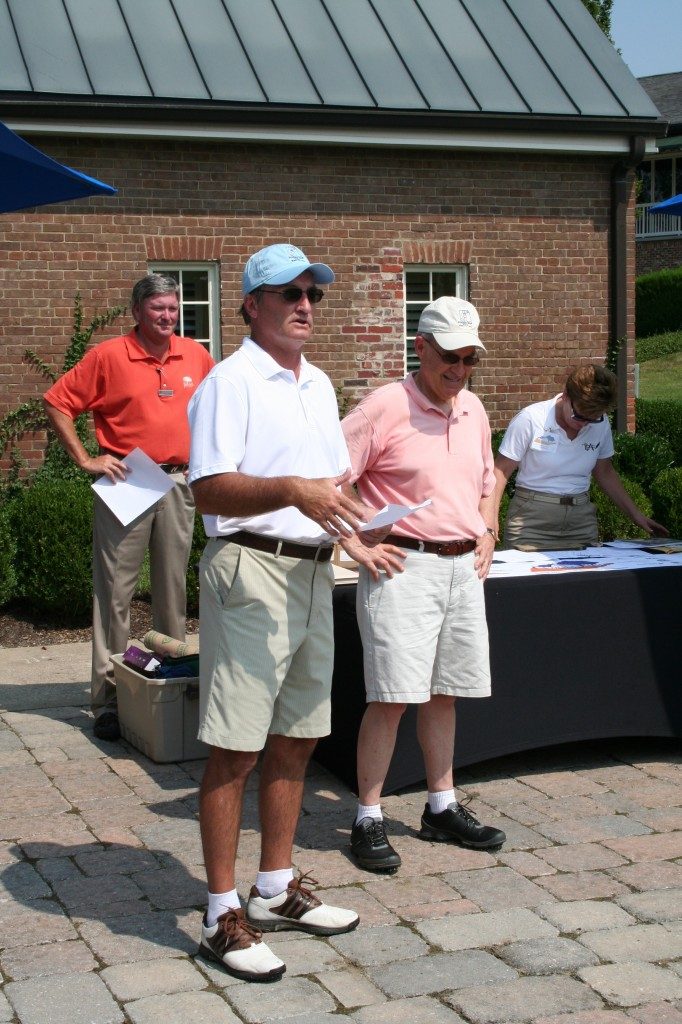 KPA members will defend the title next year in Kentucky 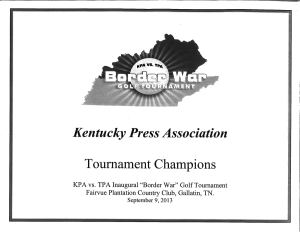 Some 60 golfers made it through 90-plus temperatures, with new friendships and proof that newspaper folks are the same in any state — great people, likeable and out to have a fun time away from the office.

KPA members took home the title by six points, a mere touchdown or a couple of long-range three-point baskets. 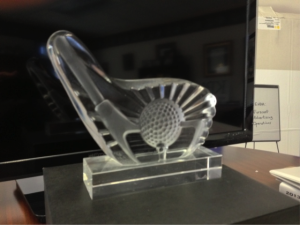 The Inaugural Border War golf trophy is proudly on display at the KPA Central Office.

I fear mentioning the Kentucky golfers representing KPA for the chance of leaving someone out. But I’ll try — John Nelson, Jon Fleischaker, Willie Sawyers, Scott Dillingham, Todd Griffin, Steve Doyle, Gary Moyers, John Preston, Anne Montgomery, Daniel Richardson and yours truly. We also had a couple of “fill ins” who are with vendors or Associate members working in both states.

And some old friends as well — Joe, Connie and Jay Albrecht, who once owned the Russell Springs Times Journal; William Mitchell who was a KPA Board Member and whose family once owned the Fulton Leader; Tom Wolfe, Bowater Newsprint; and Andrew Oppmann, formerly the Kentucky Enquirer who is now at Middle Tennessee State University.

KPA interns share their ‘What I Did This Summer’ Experiences

This past summer, as has been the case since 1993, KPA, the Kentucky Journalism Foundation and the KPA Associates Division placed interns with members. Twenty interns ended up spending 10 weeks at member newspapers and three interested in public relations spent most of the summer with a KPA Associate member.

Their compliments to the Host newspapers/companies and the excitement about their future in communications, be it journalism, public relations or a related field, reveal enthusiasm about the industry.

Check out their stories, one by one, at http://www.kypress.com/internexperiences

David Greer doubles as the KPA News Service director and heading up the Kentucky High School Journalism Association. He has sent his annual invitation to publishers and editors to sponsor their local high school(s) in KHSJA and I include his email below. Anyone wanting to sponsor their local high school program — student newspaper, yearbook, radio/TV class, any class associated with journalism/news/communications — can contact David G. at dgreer@kypress.com or by calling him at 502-223-8821. The cost for an annual membership is $50 per school.

The Kentucky High School Journalism Association, founded 17 years ago by the Kentucky Press Association, needs your help. For a modest sum, your newspaper can sponsor your area high schools in KHSJA. It’s a tremendous way to promote newspapers, the newspaper industry and journalism, in general.

KHSJA offers students and teachers workshops and an annual convention to sharpen their skills, in addition to our annual journalism contest for high school newspapers, yearbooks and broadcast programs. Last year, nearly 100 schools across the state belonged to KHSJA – some 70 percent sponsored by a local newspaper!

You can sponsor an area school for just $50 for the year. In fact, you don’t even have to write us a check. We can deduct the amount from your next Kentucky Press Service check.

Kentucky’s newspaper industry can be proud of its efforts in supporting and mentoring the next generation of journalists. You can make your local high school(s) a member of the Kentucky High School Journalism Association by completing the enclosed form and returning it to: 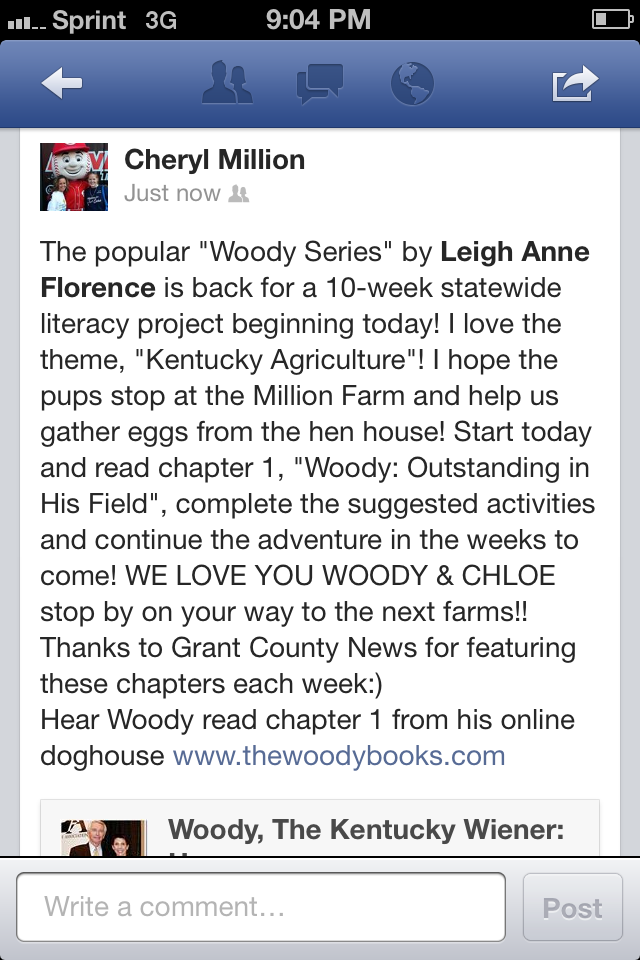 KPA’s annual Fall Chapter Series, featuring Woody and Chloe, written by Leigh Anne Florence and illustrated by Chris Ware, made its 2013 debut this week with 65 newspapers publishing the 10-week series. The focus is Kentucky agriculture and features Woody ‘Outstanding in His Field.’

Already, accolades are coming in from teachers, librarians and newspaper readers as exampled by the note shown from a Grant County librarian.

If you aren’t running the series or haven’t been reading it in one of the participating papers, here’s an insight to the story:

During a conversation with Woody and Chloe, Mom and Dad realize the pups take food for granted. Woody believes milk, eggs, chicken, and all his favorite treats originate from the grocery store or restaurant. Mom and Dad arrange for the family to visit farms all across Kentucky so the pups can see first hand all the hard work farmers put forth in getting food from the ground to the grocery store.

Join Woody and Chloe as they work on a cattle farm, fruit farm, just to name a couple. Read along as the pups plant corn, eat their first tomato right off the vine, gather eggs from the hen house and even try to get chocolate milk from a brown cow.

This award-winning project by KPA was the brainchild of Kriss Johnson, NIE coordinator at the Lexington Herald-Leader, back in 2001. Since that time, the project has received national as well as international acclaim.

If your newspaper isn’t signed up, you’re only a week behind so you can sign up today, get all the materials online and publish the series each week for 10 weeks.

Go to http://www.kypress.com/nie/signup  but do it now! You don’t want to be too far behind.

We’ve received 27 letters of interest/resumes for the Development Director position for the Kentucky Journalism Foundation. Anyone want to tell me Help Wanted classifieds don’t work? There’s proof it does!!

But his last name is David.

Anyway, a group of KPA Past Presidents will be reviewing all the applicants, selecting some to interview by telephone and then narrow that group to three to five finalists to interview in person.

A reminder: Watch for bogus invoices

And you might think the same thing about an invoice. If it looks like an invoice, then it is an invoice.

All that’s to say, watch carefully what you receive in the mail. We used to receive several “invoices” each year from telephone companies, usually for a display ad we supposedly were running in their yellow-type pages, only to see on further investigation it was not an ad we ordered, and it was not a legitimate invoice. In fact, small print in the corner said, “This is not an invoice.” But everything else made it seem like it should go to the business office to be paid.

The Wayne County Outlook received something similar this week, from U.S. Telecom out of Dallas. There is a legitimate U.S. Telecom company and it has posted a fraud alert notice on its website. The invoice in question is for $425, states that it is not a bill and that you are under no obligation to pay it. Unless you want to.

When you get a KPS check for advertising, match up payments with placements

It happens quite often. KPS will get a call from a newspaper saying an account for advertising we’ve placed has reached 120 days and the newspaper wants to know when it will be paid.

First, by Board policy, we are required to make payments at 60 days for advertising sold and placed by KPS. Only in the case when it comes from another state press service is that not in force and even then we have to pay at 90 days. And both are whether we’ve received payment or not.

KPS’ process is to issue the check showing each of the insertions we’re paying for. Most often, we’ll pay you for several placements at a time, perhaps five or more is not unusual. But each check has with it all the information you need to apply payment — Week of run date, the KPS insertion order number, the client’s name, the ad size and the amount of gross minus KPS’ commission and the total we’re paying for that ad.

About 99 percent of the time, when a newspaper says we haven’t paid for an ad that’s reached more than 90 days, it’s because the newspaper applies the full amount of the check to the oldest placements. That doesn’t help the process and it keeps us, and you, from tracking where any breakdown might be. So please have your bookkeeping/accounting department apply each check according to the check list of payments and all will be well.

If you have questions about past due accounts, payments, or check amounts, please call Bonnie Howard or Buffy Sams, our controlling department, at 502-223-8821. If need be, they’ll gladly come to your office and go over each placement and each check for as far back as you need to go. Both have been here more than 20 years, so they can go back quite a few years to trace placements and payments.

Want to test drive a 261 miles per gallon vehicle? Here’s your chance

Test Drives and Demos: Among the cars expected for driving and display include the 261-mpg Volkswagen XL1 plug-in hybrid — the U.S. debut! (display only), the Chevrolet Spark EV, the BMW ActiveE and i3 electrics, the Nissan Leaf and the Scion iQ EV.

Electrifying Cars: The Next Five Years

Plenary Session: Start your morning with a hearty buffet breakfast in the midst of SEJ’s biggest and best auto show and alternative vehicle demo yet. Test-drive and kick the tires on battery electrics, hybrids and alternative-fuel cars, including some possible world premieres. Talk to industry experts, interact with high-tech demos, and stay tuned for announcements about special programs right in the middle of the action.

The “Electrifying Cars: The Next Five Years” panel will feature two automakers with Tennessee plants, Volkswagen and Nissan; electric vehicle leaders General Motors and Toyota; and the CEO of the Nashville-based Xenon Motor Company, which makes electric scooters, who recently led the Ride the Future Tour, taking four electric vehicles across the U.S. in a Guinness World Records bid.

Check out the agenda as it continues to unfold, then register to attend the most important journalism event of the year. For the agenda and more information, go to http://www.sej.org/initiatives/sej-annual-conferences/AC2013-agenda?utm_source=VW+XL1Annuouncement+-+nonmembers&utm_campaign=SEJ2013AutoShow&utm_medium=email

To avoid late fee, register by September 10. You may still register today and watch the webinar at a later date

• October 3 The Five Most Important Questions in Sales

• October 10 How Search Engine Optimization (SEO) Can Benefit Your Advertisers

I have the pleasure Wednesday evening of speaking to Al Cross’ community journalism class at UK. It’s always fun to go out and talk about journalism and newspapers to college students, to educate them on our internship program and answer their questions about what the real world of newspapers is really like.

That speaking process has changed as technology has. A couple of years ago, I was speaking to the class and silently said to myself, “These kids don’t care what I say because they aren’t even taking notes. They’re just sitting there.” Then it dawned on me, the class atmosphere has changed since I walked those hallways. Today, they’re using cell phones to record what a speaker, or perhaps professor, is saying. So they aren’t frantically trying to write down each word like we used to have to do. They’re just sitting back, arms folded, daydreaming and they’ll listen to what I’ve said some other time.

Other than that, I think it’s a week of being around the office.

That’ll do it for another week and as always, call, fax, email or stop by if you have questions, comments, concerns, issues, clarifications, corrections, additions or deletions.

If you want to run the Woody series but haven’t gotten started, remember to sign up today.

And Board members — don’t forget to register your attendance online for the Fall Board Retreat. We need to make final arrangements with Dale Hollow Lake State Park.