Shakertown shaking it up?

We’ve had three KPA Fall Board Retreats at Shakertown/Shaker Village at Pleasant Hill and to all the Board members I’ve suggested: You have got to try the Tomato Celery Soup. It’s really a very simple soup, has to be if I can make it pretty much from memory. 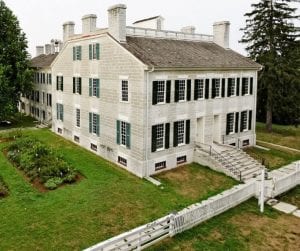 The Historic Centre building at Shakertown shows the separate entrances the men and women had to use.

Stan McKinney can testify to the suggestion of the soup and quickly became a big fan. In fact, when he goes there he orders the tomato celery soup.

Last week, he took a group of Campbellsville University students there for some photography practice. And they ate at the Trustees House. That’s when Stan got the news from the serving staff. Tomato Celery Soup is no more. It’s being phased out. Apparently the menu is not only changing but the crafts workers are as well. Not more handmade brooms, among the best brooms you’ll find anywhere, and some other locally produced items you could only find at Shakertown.

I guess Stan did have one positive experience. After being told Tomato Celery Soup was no more, the serving staff was able to find one last bowl of it served it to Stan.

So I checked with the Shakertown staff via email and a subject line of “Say It Ain’t So.” The response was expected — it is so — although they might have the soup once in a while.

A new executive chef is on staff and will be making soups from scratch. Tomato Celery Soup is not a “made from scratch” soup. I guess that’s true — it begins with a can of tomato soup. But that has to be one of the top items on Shakertown’s menu the last 20-30-40 years.

Stan also relayed that the crafts folks who displayed their talents in making brooms and other items may not be in Shaktown’s future.

Even the Shakertown website about the Trustees House acknowledges the soup:

Guess I’ll just be heating up the pan more now to make the soup. A bowl of that and a grilled cheese sandwich is savory.