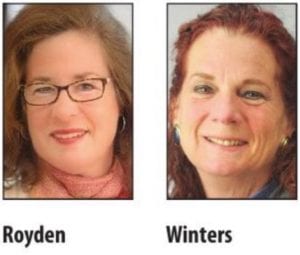 Friend and former colleague Wendi Winters was among the five fatal victims.

“The news of [Wendi’s] passing brought not only tears, but also the wish I had gotten to know her better,” Royden said. “Today, thoughts of her life inspire me tremendously.”

Winters was among five journalists slain last week when a man blasted into the Gazette newsroom with a shotgun. The man charged with killing the journalists is Jarrod W. Ramos, who was angry at the newspaper over its coverage of his harassment case against a woman.

Winters, Rob Hiaasen, Gerald Fischman, John McNamara and Rebecca Smith were each killed in the assault. Winters, 65, had a son and three daughters, according to news accounts. She started writing freelance for the Capital Gazette but later joined the newspaper full time as a columnist and editor.

Several years ago before moving to Kentucky, Royden and her family lived in Edgewater, just outside Annapolis, Royden said. Winters lived in the same community, she said.

“Wendi and I were freelancers for The Capital,” Royden said. “I also worked on a nature blog which was posted on the newspaper’s old website.”

The two became acquaintances and “friended” each other on Facebook.

“She was kind and compassionate, yet could look at challenging situations with humor,” Royden said. “She was heavily involved with her church and the lives of her four children. To me, it appears she lived her life to the fullest. She was a big part of the communities where she lived and worked. I saw an article online about her time in New Jersey, and it was highly laudable.

“Even though she was a busy person professionally, Wendi took time to be with friends and family.”

At the Capital Gazette, Winters was a columnist, editor and photojournalist. She often wrote about topics such as theater, community groups, arts festivals, young people and houses, Royden said.

Royden fondly remembers a particular conversation with Winters from years ago. The two journalists were discussing Winters’ church when she mentioned she had spent the past two nights at a regional youth conference and needed a nap. Later, Winters said she planned to volunteer as a chaperone of the Navy Junior Reserve Officers Training Corps (NJROTC) fundraiser during a Washington Redskins football game.

“We’re down in the front row, but I’ll be pretty sleepy — and after seven years — don’t understand the games or the cheerleaders,” Winters wrote Royden in a text adding a smiley face.

Since Royden returned to Kentucky, the two occasionally touched base via Facebook, sometimes exchanging birthday wishes. Winters often posted Girl Scouts photos and Royden shared with Winters her days as a Brownie and Junior Girl Scout.

Following the details of the Capital Gazette shooting has been especially emotional for Royden.

“Not only was I affected by the loss of Wendi and her four coworkers, but also by what others witnessed during the massacre,” she said.

Another of Royden’s former coworkers at The Capital Gazette was photojournalist Paul Gillespie who was one of the 11 people reported to be in the newsroom at the time of the shooting. Several news outlets, including CBS News, have interviewed Gillespie about his harrowing experience during the event.

“[Gillespie] and the other photojournalists were extremely knowledgeable and I enjoyed being inspired by them as well,” she said. “I pray for healing and the well-being of everyone affected by the person who prematurely and violently took the lives of five people.

“I’m heading to Maryland later this month, and am sure flowers, cards and prayers are appreciated. But honestly, one of the most caring things anyone could do would be to donate money to assist families.”

Mike Scogin can be reached at mscogin@news-graphic.com.

Nancy Royden has asked we include information to The Capital Gazette Families Fund. Anyone wishing to donate can call (410) 280-1102 or go online to cfaac.org or send a check to CFAAC, 914 Bay Ridge Road, Suite 220, Annapolis, Maryland 21403 with “The Capital Gazette Families Fund” listed in the memo line. Donations made through GoFundMe are not tax deductible, but donations made directly to the fund are.