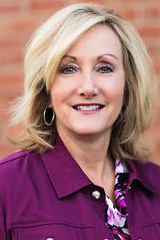 Jamie Sizemore has been named the executive director of Feeding America Kentucky’s Heartland.

The regional food bank that serves 42 counties announced the hire Thursday. She starts on Dec. 3 and will take the helm on Jan. 2.

“Jamie is a talented and proven leader,” said Tim Hagan, FAKH board chairman. “There is no other person more qualified for this role, and no other could be as dedicated in our mission to feed the hungry.”

She will replace Gary Miles, who announced his intention to retire earlier this year after 18 years as executive director.

“I am honored to be working with the dedicated FAKH’s staff, passionate volunteers, financial supporters and our community partner agencies, as we continue our mission of advocating and providing for those in need so no one goes to bed hungry in our service area,” Sizemore said in press release announcing her hiring.Sizemore will oversee the daily operations of FAKH as it serves over 225 partner agencies in 42 central, south central and western counties in Kentucky. The organization distributes over 12.5 million meals per year, acquired through donated food, grocery items and government commodities. She will also serve as a member of the Kentucky Association of Food Banks statewide board.

Sizemore served for 10 years as publisher of The Kentucky Standard and stepped down last summer to attend to family needs.

She told The Standard Friday that in the intervening months she had been able to make arrangements to fulfill her family obligations.

“For me, the last fourth months have afforded me the time to take care of my family,” she said.

Sizemore has long been an advocate for fighting food insecurity faced by many Kentuckians, and she said the position called to her passions.

“This opportunity just came up at an ideal time,” she said.

The new position is a big change for Sizemore.

She spent three decades in the newspaper industry. She began her newspaper career in 1986 with Landmark Community Newspapers serving in various leadership roles in Virginia, Maryland, and Tennessee before coming back to Kentucky in 1992 as advertising manager at The News-Enterprise in Elizabethtown. Sizemore also held the positions of new ventures manager and circulation manager during her 16 years with The News-Enterprise.

During her time at The Standard, Sizemore was active in several civic organizations including Tri-County Kentucky United Way, Bardstown Rotary Club, Flaget Memorial Hospital Foundation, and Central Kentucky Community Foundation. Since 2015, she served on the FAKH Board and served as chair of the FAKH Marketing Committee. Sizemore actively served as a board member and past president of the Kentucky Press Association, and was awarded the Boy Scouts of America’s Distinguished Citizen Award for Nelson County in 2017.

She is a graduate of Western Kentucky University, lives in Elizabethtown with her husband, Toney, and has two adult sons, Grayson and Corbin.

FAKH is a regional food bank that provides assistance to more than 174,500 people in 42 Kentucky counties each year.  Through support from individuals and organizations such as United Way it distributes over 14 million pounds of food to over 225 food pantries, soup kitchens, and shelters. FAKH also sponsors various hunger relief programs including the BackPack Program and Senior Box (CSFP) Program.  FAKH’s main office and warehouses are located on Peterson Drive in Elizabethtown.