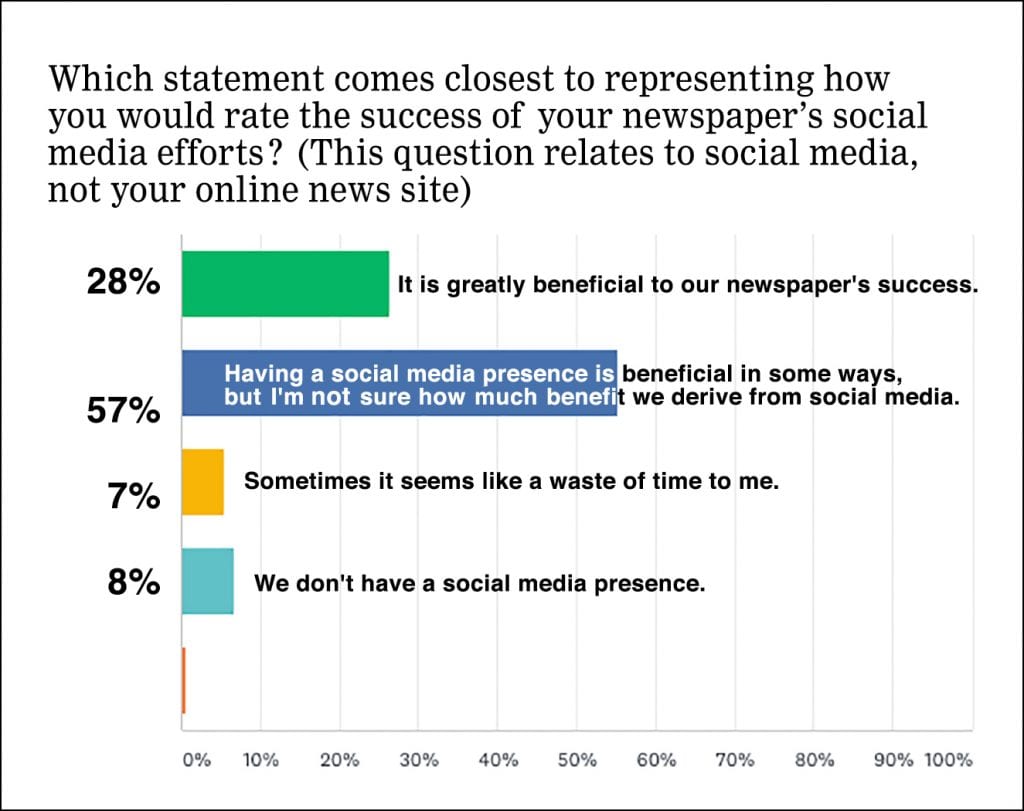 When my publisher friend Joel Washburn asked me to visit his newspaper in McKenzie, Tennessee in June for a couple of days to work with his staff, he had the usual lists of items to cover while I was there:

It was the sixth item on the list (don’t worry, it’s coming) that made me pause:

– How other newspapers are benefiting from use of social media … hmm.

One of the inside jokes among my friends who speak at newspaper conventions over the past ten years or so has been the number of workshops at conventions related to social media. For a while, five or six years ago, it seemed like every other breakout session had to do with social media.

While preparing to meet with Joel’s staff, I went to my recent survey of North American publishers completed back in April. It was the fifth annual survey and, fortunately, we had questions about digital and social media on the survey each year.

When I looked at the 2019 survey results, I learned that 28 percent of respondents indicated social media is greatly beneficial to their newspaper’s success.

As I looked closer at the respondents, it seemed the dailies were four times as likely to respond this way than weeklies. I suppose that makes sense since dailies are more likely to depend on online/digital sales for revenue. Another 57 percent of respondents indicated they felt like their newspapers benefit in some way through use of social media.

Wanting to give Joel some helpful information, I went – where else – to social media to get some assistance. On Facebook, I asked friends who worked at newspapers to share how they successfully use social media at their papers. Within a few hours, I had more than 40 responses. Here are a few of them:

“We post questions on hot topics in our area and then use the comments on our opinion page (in the printed newspaper) in our ‘social media’ section.”

“We get a lot of leads for stories on our newspaper Facebook page, both for news and features.”

“On the morning our paper comes out, we post a collage of photos and a teaser such as, ‘For the stories behind these photos, pick up a copy of today’s paper.’”

“Going live at high school sporting events draws in a lot of people to see our brand, but we haven’t monetized it.”

“I’ve learned to monetize a boost. ‘I’m glad you enjoyed the story we did on your new business. For $20 (or whatever) we can boost that for you. Look at our number of followers.’ It’s not a big money maker but it makes the new potential customer happy.”

“We ask people to submit photos of themselves reading your paper in amusing ways, and then pick the best submission to receive a prize.”

As I looked though the early responses (early enough to meet my column deadline), I didn’t see anyone writing about making money through social media posts, but I did notice a lot of respondents were using social media to prompt readers to pick up or subscribe to their newspapers which, obviously, could benefit the bottom line.

I had an interesting experience with social media just last week. I hosted a webinar titled, “Kevin’s 100-Minute Extravaganza.” I expected a low turnout because people generally don’t attend webinars in the summer, due to vacations, back-to-school deadlines, holidays and whatever.

Most registrations come in response to email blasts and promotion by various press associations. However, I noticed a serious bump from a couple of Facebook posts I created a week before the webinar. Later, I noticed several folks had shared the posts on their Facebook pages. Then a couple of associations asked if they could sponsor webinar registrations for their members.

In the end, close to 100 newspapers eventually registered for the webinar, most within four days prior to it taking place. And when I looked at the registrations afterwards, it was apparent about half of those were a result of those couple of Facebook posts from the week before.

What lessons am I learning about social media? It’s pretty apparent it’s not the end-all, and probably isn’t going to make a major dent in most newspapers’ bottom line anytime soon. However, used effectively, it can be a tool to drive readers to your print and online editions of your newspaper, promote subscriptions, and even be used as a service to advertisers.

If your newspaper is investing in social media, I would suggest you regularly examine what’s being done and gauge its effectiveness in driving new subscribers and increasing ad revenue.