Have you noticed the number of elaborate process color but totally meaningless ads in today’s newspapers?

They’re a designer’s delight and a reader’s nightmare. Colored type is laid into colored backgrounds. Images are often printed on top of images. But most disappointing is no clear “call to action” being presented to the reader.

An effective print ad does its job the same as a professional ad salesperson does his. The five necessary points of an ad should emulate the five steps taken by the local advertising salesperson every time he or she calls on a potential client.

1. It is necessary to get the buyer’s attention.

A salesperson can accomplish this with a confident greeting, a solid handshake and a bit of new information. News of a special promotion, for example, or an increase in paid circulation numbers.

A print ad does the same thing with a creative, commanding headline. Some headlines depend on power words like “new”, “free” or “guaranteed” to command readership. But the most effective attention getters involve an effective play on words like “You’ll flip over our weekend pancake special.”
Here is a half-page ad that meets most of the points discussed. The headline is a combination of the name of well-known annual event coupled with that of one of the contacted lead performing artists. There is a price point. The use of blue to tie everything together gives balance to the black and white and color performer’s photographs. But the light blue copy in the black background is difficult to read in the printed version. 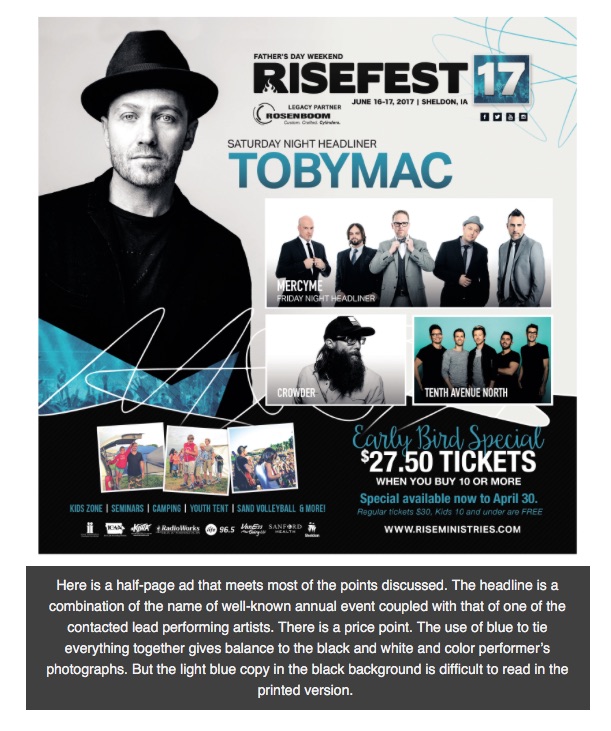 2. There needs to be support for the value of the offer.

An experienced print salesperson reinforces the presentation with handouts and pre-designed ads that reveal all the ad buyer is getting for the dollars being spent. An empowered print ad does this with an illustration of the item or service promoted in the headline such as a drawing of a flapjack soaring above the griddle.

But the better image would be a photo of a mouthwatering stack of flapjacks, on a platter flowing with syrup, hot and tasty, ready for eating. The bigger the photo the greater chance the message will result in a closed sale.

Both the headline (introduction) and illustration (value) play an equal part in a well-planned print ad. Either one can dominate and play the larger role. In designing any ad it is best to do thumbnails both ways to decide which has the most selling power.

And place the headline and illustration into a consistent format and choice of typefaces that the advertiser can be identified even before the reader gets to the firm’s logo.

When selling face-to-face final success comes through providing positive buyer-entered details. Those might include the response the promotion is sure to attract, the demographics of the audience and the reach and loyal readership of the paper’s subscriber base.

When the advertiser is selling a product or service in a print ad, the greatest success also come from sharing details. Although body copy can sometimes be too long it can also be too short. A good descriptive paragraph about those flapjacks we discussed earlier might include all the extras that can be added: pecans, strawberries, bananas and blueberries, Or the variety of syrups available including whipped cream. Also important are the exact times the flapjacks are available. Finally, there is always room for an add-on like “For a real meal deal get them with a side of bacon and eggs for just $1.49 more”.

Many businesses prefer to advertise general discounts such as 15% to 25% off. But that means little to readers who have no idea what is the regular price. When percentage discounts are advertised, it is wise to also include information such as “Regular $9.95 to $29.95” as an additional motivator to buy.

Also, don’t let high prices scare you. Many buyers want their friends to know just how much they had to pay for their designer sunglasses, BMW or fancy outdoor patio set. High prices can attract the demanding buyer.

When selling advertising to a merchant the price point is usually followed with an attempt to close. I like the assumptive “Should we start that next week” approach.

The print ad traditionally ends with the advertiser’s logo and contact information at the close as an invitation to make a purchase.

Logos are like a person’s signature at the bottom of a letter. A firm’s logo should convey the personality and unique selection available at the store. It should be solid and lasting. It should never be too cute or trendy to stand the test of time. The design should be easy to read and include the firm’s street address, town, zip, telephone number, hours the store is open, accepted credit cards and email address.

The logo should never be created in any of the traditional typefaces as the paper uses for general advertising. It should be designed so the total package can be enlarged or reduced for any project without losing the readability of the contact information.

Peter W. Wagner is founder and publisher of the award winning N’West Iowa REVIEW. He is a regular presenter at State Press Association Conventions and Group Seminars. You can contact him regarding his “Quality Ads for Quantity Sales” program at pww@iowainformation.com or (cell) 712-348-3550.