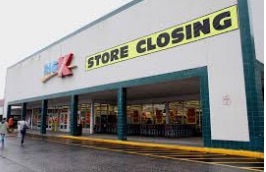 Call ’em what you want — Going Out of Business, Lost Our Lease, Moving, Fire, Store Closing, Liquidation, Decided to Retire sale. That matters not. What does is that state law requires the sale to be registered with the local county clerk and ALL advertising by that business must include the Permit Number received from the county clerk.

It’s all designed to protect the consumer. There have been a lot of businesses closing down this year already. Office Depot, Radio Shack, HH Gregg plus several smaller local businesses. Whether big or small, whether chain or individually owned, the business sale comes under the same law. KRS 365. (See link below to the law.)

It’s been a while since a question came in about Going Out of Business sales and such, but this week we had quite an exchange. A Frankfort jeweler decided it was time to close its downtown store.  The news made it the lead story in an issue of The State Journal. Naturally, the business was wanting to advertise that it’s going out of business so some ads started appearing.

And the store reached out to newspapers in surrounding counties, hoping to attract shoppers from Central Kentucky. But the store didn’t not include a Permit Number in its ads and when asked, said it didn’t know anything about having to have such a permit.

The store contacted the Frankfort City Clerk who told them no permit is needed so the store used that as the “law” and didn’t pursue the matter further. But the newspapers in other locales weren’t going to run the ads without the Permit Number. I told those newspapers that cities aren’t involved at all so certainly they wouldn’t know an application has to be filled out and a Permit Number issued.

It’s a state law and it requires the County Clerk to issue the Permit Number.

First thing Thursday morning, there was a call from the store wanting to know more about going out of business sales. I explained the law, told them what was required, where to get the permit and to include that in all advertising.

In the early afternoon, I received a call from the Consumer Protection Division of the Attorney General’s Office that the law is still in place, that the AG’s Office takes it seriously and that newspapers and other media can help protect consumers by ensuring businesses follow the law.

The store was satisfied now that the confusion had been cleared up.

I’ve seen a lot of newspapers not including Permit Numbers in whatever fashion a business wants to call its sale. But it’s for the good of the consumer to make sure that merchandise from other locations isn’t being brought in the back door to be sold.

Here’s a link to the KPA website with the full law stated. Link to GOING OUT OF BUSINESS TYPE SALES

Keep it for your staff and even have it handy if an advertiser questions whether such a law exists or not.