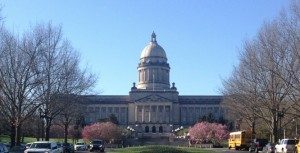 Lobbyists and the businesses and organizations that employ them spent $15 million in the first eight months of 2016, and lobbying spending is on track to eclipse previous Kentucky spending records.

The record for lobbying spending was set last year, when $19.3 million was spent. If spending continues at its current pace, at least $5 million will be spent in the last four months of the year, sending the 2016 total to an all-time high of $20 million.

Since 1994, the first full year of lobbying reporting, Kentucky lobbying spending has tripled from $6.4 million to the 2015 total of $19.3 million. More than 90 percent of spending is compensation paid to lobbyists.

There are 673 businesses and organizations employing lobbyists, but the number of lobbyists has decreased to 563. This continues the trend of employers contracting with one of the many lobbying firms which have opened or expanded in Frankfort, instead of sending their own employees to the State Capitol.