The Frankfort State Journal is seeking the public’s assistance in identifying an “extreme couponer” who they say is stealing newspapers from their sidewalk newsstands. 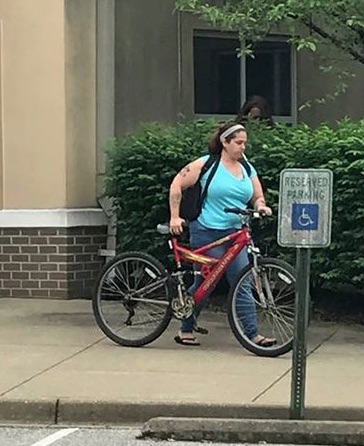 This lady is suspected of taking stacks of newspapers from The State Journal’s racks.

Someone captured a photo of the suspect after she allegedly raided one of their stands. Landscapers say they watched as the woman rode her bike up to the sidewalk stand, and instead of only taking one newspaper, she reportedly filled two book bags worth.

“Extreme coupon-clippers are wiping us out, especially on Sundays, making it hard for those who want to enjoy our newspaper to find a copy. If you know the person in this photo, send us a DM with her name and any other information you have about her. If it leads to a successful prosecution, we’ll give you a free one-year subscription to The State Journal and FRANK. magazine,” The State Journal said via their Facebook page.

State Journal Publisher Steve Stewart told LEX 18 that there has been an industry-wide uptick in people taking more than one newspaper.

“That just happens to be the day you can count on there being coupons in the newspapers as well,” said Stewart.

Thefts are causing the paper to lose profit, but Stewart said it’s also creating an inconvenience for customers who come later.