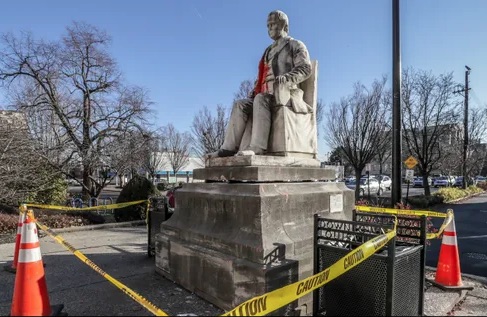 A controversial statue in downtown Louisville that has been vandalized and called racist was removed Tuesday.

The statue of George Dennison Prentice sits outside the main branch of the Louisville Free Public Library. Prentice was the founder and editor of the Louisville Journal in the mid-1800s and was associated with the pro-slavery and the anti-foreigner movement during the 1850s and 1860s.

Preparations to move the statue began Monday and will be finished by Tuesday, the city announced. It will be taken to a storage facility on Lexington Road owned by the city.

Prentice was known for writing anti-immigration and anti-Catholic editorials.

Some historians have argued that Prentice’s editorials heightened the climate of hatred, with some of his writings dehumanizing immigrants and Catholics, making them seem like a larger threat, said A. Glenn Crothers, an associate professor of history at the University of Louisville.

Crothers said some historians see Prentice as a key figure in inflaming passions ahead of the 1855 Bloody Monday riots in which more than 20 people were killed after Irish and German immigrants were attacked by members of the American Know-Nothing Party.

Such anti-Catholic and anti-immigrant rhetoric was common in many cities at the time, Crothers said, saying that Prentice can be viewed as part of a larger pattern of anti-immigrant politics in the 1840s and 1850s.

“You could pull out ‘Catholic’ in the 1850s language and substitute ‘Muslim’ or ‘Mexican’ and it would sound similar to what we’re hearing today,” Crothers said.

The Prentice statue, as well as the John B. Castleman statue in Cherokee Triangle, was vandalized in February with orange paint.

In August, Mayor Greg Fischer said the city would remove the statue. The decision came after the mayor reviewed a report by a public art and monuments committee that offered guidelines and questions for city officials to consider when deciding what to do with controversial statues.

No decision has been made about how the site at the library will be used after the statue is moved.

“Mr. Prentice used his position as founder and long-time editor of the Louisville Journal to advocate an anti-Catholic, anti-immigrant message that led to the 1855 Bloody Monday riot where at least 22 people were killed,” Fischer said in a statement. “His statue is especially inappropriate outside the library, a place that encourages education, inclusiveness and compassion.”

What will happen to the Prentice statue has not been determined. The city said in a statement that Cave Hill Cemetery, where Prentice is buried, declined to take the statue.

The Archdiocese of Louisville does not generally take a position on civic monuments but supports the mayor’s decision to remove this one, spokeswoman Cecelia Price said.

Price said that Prentice has “a very mixed history” in that he “established a very successful newspaper but also encouraged hatred for Catholics and for immigrants in its pages.”

Price said that it’s “important to distinguish between historical presentations that help us to remember history, good or bad, and those that honor an individual and may no longer represent the values of a community.” She said the Prentice statue appears to be the latter.

Crothers said he appreciates the debates about taking down statues but that he personally is against taking them down.

“All these statues have this … broader story,” Crothers said, saying that statues tell a story about the values of a community when they were erected. “History is always contested. We can use the statues as a vehicle to understand the history we have.”

Crothers said that removing Prentice’s statue “speaks to a move for wanting a more tolerant society, and that’s a good thing.”

But he said he worries that erasing part of our past may make it easier to forget that part of Kentucky’s history is “rooted in racism. It’s not only rooted in that, but it’s an important part of our history.”