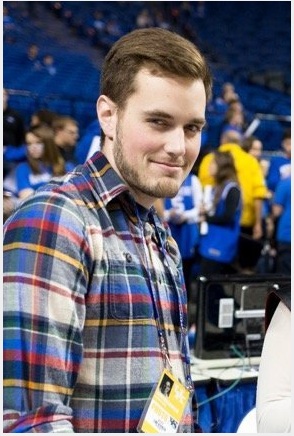 In another story this week in On Second Thought, two suspects charged with the murder of Jonathan Krueger, a photographer for the Kentucky Kernel, were ruled competent to stand trial. I offer this as background information on his murder and a resulting GoFundMe page set up that raised more than $30,200.

The Kentucky Kernel photo editor, Jonathan Krueger, was murdered the morning of April 17, 2015, near campus in an apparent robbery attempt. So far, three suspects have been arrested and charged in Jonathan’s death. The third suspect, a 17-year-old male, was arrested Monday and may be the last suspect charged in the UK student’s death.

By now, most all of Kentucky, and certainly Kentucky newspaper staff members are familiar with the story. Krueger was killed on East Maxwell Street near Transylvania Park early Friday morning as he and a friend walked home. The friend escaped the assault and ran to a nearby house where two other UK students kept him safe. They eventually went to the scene and found Jonathan in the street, struggling to breathe. He was rushed to the UK hospital where he was pronounced death about 2:35 Friday morning.

Memorial services were held on campus for Jonathan and a makeshift memorial developed on East Maxwell near where Krueger was killed. Monday evening, The Kernel held a memorial service Monday night and then several hundred students gathered outside Memorial Hall for a candlelight vigil.

Kernel adviser Chris Poore said, “The thoughts and prayers from the professional community have been comforting for our staff and students.”

(Special note: http://www.gofundme.com/JonathanKrueger — The Kernel Press Inc. has started a fund to memorialize the life and contributions of our late colleague Jonathan Krueger. Once $10,000 is raised, an annual endowed scholarship will be awarded by the Kernel Board to a promising Kernel photographer. A tax-deductible gift may be made to “Kernel Press Inc.” Contributions may be sent to: Jonathan Krueger Scholarship Fund; Kentucky Kernel; University of Kentucky; 026 Grehan Journalism Building; Lexington, Ky. 40506)

The Kernel Press Inc. started a fund on Friday to memorialize late photo editor Jonathan Krueger.
The annual scholarship will be awarded to a promising Kernel photographer by the Kernel Board.
The scholarship’s online GoFundMe account raised more than $14,200 by press time Sunday night. (By Wednesday morning, the total was $23,445 from more than 300 contributors.As of earlier this week, the total exceeded $30,200 that was raised by the effort.)
Jonathan Palmer, a former Kentucky Kernel photographer, said he and his wife Danielle Palmer, a former Kernel writer, set up the account to make it easier for students and young people to donate.
“The overwhelming outpouring of support has been great,” Palmer said. “We hoped, but you obviously don’t expect it to take off that way.”
“Being able to preserve his legacy seems like the best thing we can do,” Palmer said.
Duane Bonifer, chairman of Kernel Press Inc., said that although the fundraising and planning is still preliminary, he may speak to the Kernel Board about awarding the first scholarship in the fall of 2015.
“The thought is that this is a great way to memorialize his life and contributions,” Bonifer said. “It helps future generations of photographers.”
Typically an endowment scholarship takes a year, as it needs to be invested and generate interest that will fund the award, Bonifer said.
But as a $10,000 endowment fund can usually expect to generate about $500 annually, Bonifer said it may be available for the next school year.
The general rule of thumb, he said, is that the scholarship will be up to five percent of the lump sum raised.
So the amount received by each photographer will depend on the amount of money raised, he added, though the hope is that with each year, the contributions to the fund will grow and the scholarship will increase.
“The minimum is that $10,000,” Bonifer said. “The maximum is limited by the generosity of people who want to give.”
Because the donations’ interest actually pays for the scholarships, Bonifer said that the scholarship could remain active for generations to come.
“That’s the great thing about scholarships — they last in perpetuity,” Bonifer said. “Theoretically, you always have that money there to support that cause.”