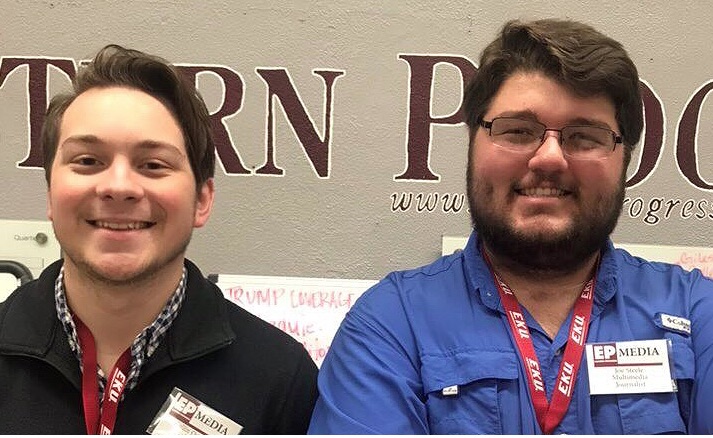 Taylor Six found the tenacity to persevere in the face of opposition.

Rachel Bowling learned to become more open-minded to the opinions of others.

Joseph Steele felt honored to cover the landing of Air Force One.

All the Eastern Progress student journalists who covered the Donald Trump rally at Eastern Kentucky University on Saturday, Oct. 13, gained “real-world journalism experience in covering a national event with the president of the United States,” according to Ginny Whitehouse, professor in the Department of Communication.

“We had a staff of 15 student journalists who were professional throughout 13 hours of coverage and follow-up,” said Whitehouse. She added that the students met Air Force One, filmed live interviews with supporters and protestors, constructed social media posts, photographed the crowd, and conducted themselves professionally among the crowd. “They wrote and interviewed and photographed and edited and taped, then went back and worked some more,” she said. “They did Eastern proud.”

Their work, though, began long before that day. Six, Progress news editor, admitted that preparation, and apprehension, commenced as soon as they learned of the rally on Oct. 5. “I was very anxious the moment (President Trump’s) visit was announced, simply because of the importance of the visit and the pressure the team would be under to have great coverage every day, all week long,” she said.  According to Six, the newspaper staff and the Department of Communication began strategizing immediately. Their strategy included creating and posting articles online each day the week before and designing a plan to cover all aspects of the rally.

Beginning on Oct. 9, the Eastern Progress team began posting articles, videos, graphics and polls to the newspaper’s Facebook page. That media covered topics such as student and faculty reactions to the visit and the city’s preparations for the rally.

The students credit Department of Communication faculty for helping them pull off such demanding coverage. “Our team of advisers and professors couldn’t have been more helpful in executing all of this,” said Overton, Progress editor in chief. “They pushed us to come up with content throughout the week, stay on top of deadlines and go into Saturday with a concrete plan in place.” Six concurred with Overton. “As long as we were there, the faculty and staff are there just as early and late as us.”

On the day of the rally, the students were divided into teams. One team covered the rally itself at Alumni Coliseum, and another covered the landing of Air Force One at Blue Grass Airport in Lexington. The rally team, which included Six and Bowling, the Progress social media director, began their day at the Progress office at 8 a.m., double checking photo and video equipment and didn’t end it until 11:30 that night. The two spent the day running back and forth between Alumni Coliseum and the office, alternating coverage and editing. Before the rally, Bowling posted live video updates to the Progress social media channels, both from inside the Coliseum, and of protestors and supporters outside. She relished the diversity of perspectives present at the rally. “This experience has given me the opportunity to really become more open-minded to the opinions of others. Speaking to both attendees and protestors was very enlightening.”

That is not to say that Bowling didn’t have her fair share of nerves – especially given that the national political rally was her first journalistic assignment ever. “To say that I was out of my comfort zone is an understatement,” she confessed. “This meant a great deal to me because not only did I have to have to have faith in myself, but it also meant that the people around me believed in me, too.”

From the press stands during the rally, Six filmed, live-streamed, live-tweeted, and wrote articles. In those stands she and Bowling received their first hard lesson in journalism when the crowd began to boo them and the other media representatives. While disappointed, Six also found the encounter eye-opening. “I learned that in journalism, some people will agree with you and some will hate you,” she said. “Writing and reporting in today’s times can be especially tricky. I learned that to thrive in this field, I must stick to my values and remain unbiased and factual.”

The blow of the crowd’s reaction was softened, Six said, by the support and encouragement of the students’ professors and advisers. “The department really invests their time into the students and making sure we have the knowledge we need to succeed in the real world of journalism, and genuinely believes in each of us,” she said.

The Air Force One team, composed of Overton and Steele, Progress visuals editor, arrived at Blue Grass Airport at 1 p.m. to prepare photo and video equipment to capture President Trump’s arrival. The two also live-streamed the president getting off the plane and covered Trump’s departure from Richmond. Their day extended into midnight, with finishing recaps in the Progress office.

Both Overton and Steele are grateful for the opportunity the Progress afforded them. “I was very excited to be a part of this historic event, and I felt very honored to be able to cover the extremely exclusive landing,” said Steele. Overton, who graduates in May and hopes to begin a career in the newspaper industry, particularly appreciates the career advantage it gave him. “Not too many college kids can say they did what we did,” he said. “The experience definitely gave me a glimpse of what it’s like to cover stories at the national level and gave me some great exposure as a student journalist.”

Coverage of the high-profile event went off without a hitch, thanks to the coordinated efforts of student journalists and Communication faculty. “I was extremely proud of myself, the Progress staff and the department for how hard we worked and how great we all work together,” said Six.

Overton credited his education at EKU for the ability to pull off such demanding coverage. “I couldn’t have executed it so well if I hadn’t practiced those skills for the Progress or in my classes,” he said. Ultimately, the impact on the students runs deeper than an extra line on their resumes. As Bowling said, echoing the sentiments of her colleagues, “This experience has given me the confidence to go out of my comfort zone and try new things.”