Student journalists: Raisin’ hell because they believe in the truth 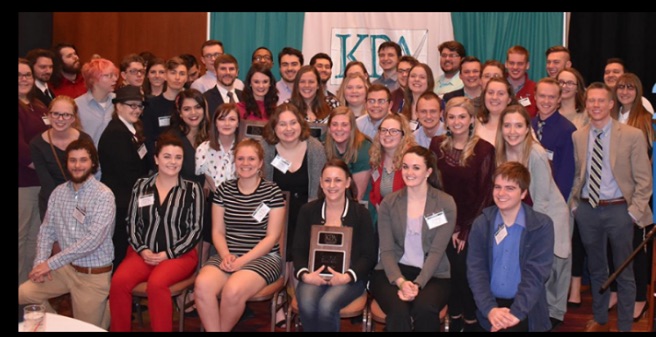 Student journalists pose after being recognized as 2018 Most Valuable Members of KPA. The award was presented by 2018 KPA President Peter Baniak during the association’s 150th Anniversary Convention in January. Ray Hunter, author of the article below, is seated in the middle of the front row, holding the plaque presented to The Bridge, Somerset Community College.

It’s no secret that the free press is under attack in the United States.

With allegations of “fake news” flying from both sides of the aisle and the commander-in-chief’s declaration that journalists are “the enemy of the people,” Americans are having serious trust issues with the news media.

Sadly, it appears this mistrust has trickled down to our institutions of higher learning.
In a number of schools across the country, we have seen student journalists and their advisers stripped of editorial control, threatened by school officials, and punished for exercising their First Amendment rights.

In December 2016, the American Association of University Professors, the College Media Association, the National Coalition Against Censorship, and the Student Press Law Center issued a joint statement entitled, “Threats to the Independence of Student Media.”

According to their findings, “Many college and university authorities have exhibited an intimidating level of hostility toward student media, inhibiting the free exchange of ideas on campus.”

Right here in the Commonwealth, two of the biggest and most-respected student publications, UK’s Kentucky Kernel and WKU’s College Heights Herald, are involved in ongoing legal battles with their own administrations. The lawsuits are a result of the student journalists investigating claims of sexual assault on female students by university professors, and the administration’s refusal to release the public records
Time magazine named journalists the 2018 “Persons  of the Year.” The Student Press Law Center named 2019 “The Year of the Student Journalist.” And the Kentucky Press Association (KPA) presented student journalists with the 2018 Most Valuable Member Award at their annual Winter Convention in January.

At the KPA awards banquet, outgoing president Peter Baniak said, “Kentucky student journalists have pressed for and won open meetings and records decisions against their administrators. And they fought back loudly as schools tried to cut or take their funding. In other words, Kentucky’s student journalists are raising hell.”

Being recognized for our hard work feels good, and the KPA sure knows how to throw a party, but that’s not why we do what we do.

As student journalists, we tell the stories our communities want to hear and, sometimes, the stories they don’t. We are their eyes and ears, and they rely on our voices to tell them what’s really going on, in public and behind closed doors.

Nobody would relentlessly chase down leads, interview the uninterested and unwilling, stay up all night organizing evidence, and agonize over every word of an op-ed (like this one) for a trophy.

No. We are “raising hell” because we believe in the truth.

We understand, on some deep and unshakeable level, that an attack on the free press is an attack on democracy, and we are brave enough to do something about it.

The threats to student journalism are undoubtedly real, but those who issue them are in for a fight.