WKU Student Publications honored three people with a passion for journalism as part of 2017 homecoming activities at Western Kentucky University: 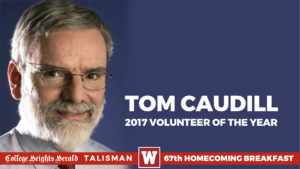 Tom Caudill, who retired in August as managing editor of the Lexington Herald-Leader, was named Volunteer of the Year for 2017 on Oct. 12 by WKU Student Publications at the university’s annual Summit Awards for honoring volunteerism.

Caudill, who lives in Lexington, is chairman of the Student Publications Advisory Board, a position he has held since 2012. In that role, he and other members of the board offer professional advice, coaching and support to ensure WKU’s two student publications — the College Heights Herald newsroom and the Talisman magazine — provide students with experience relevant to building a career in professional news organizations.

For Caudill, who was editor-in-chief of the College Heights Herald in 1975, it was his second time to be honored as Volunteer of the Year. Caudill previously won the award in 2008, when he also was selected to receive the Distinguished Service Medal, WKU’s top honor for volunteers. 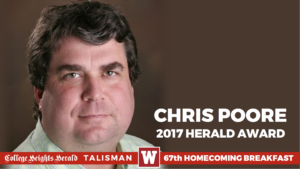 Chris Poore, adviser to the Kentucky Kernel at the University of Kentucky, was given the 2017 College Heights Herald Award for Outstanding Contributions in Journalism on Oct. 14 during the 67th annual Student Publications Homecoming Breakfast.

Poore, who lives in Lexington, has been adviser to the Kernel for 17 years, during which the Kernel has won three national Pacemaker awards, the top honor given to a student-run college publication. Poore, who was editor-in-chief of the College Heights Herald in Spring 1991, previously worked for the Lexington Herald-Leader and for The Ledger-Enquirer in Columbus, Georgia.

He is the 66th winner of the Herald Award, which honors outstanding professional work by a member of the WKU Student Publications family. 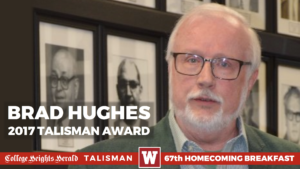 Brad Hughes, who retired this year as director of communications for the Kentucky School Boards Association, was given the 2017 Talisman Award for Outstanding Contributions in Communications on Oct. 14 during the 67th annual Student Publications Homecoming Breakfast.

Hughes, who lives in Louisville, started his career in 1973 as a broadcast journalist at WFKN in Franklin, Kentucky, and spent the next decade in radio and television in the region. In 1983, he was appointed director of communications for the Kentucky Cabinet for Human Resources, where his office was named the nation’s top state government public affairs unit in 1991. In 1993, Hughes joined the school boards association, from which he retired this year.

He is the 21st winner of the Talisman Award, which honors outstanding professional work by a member of the WKU Student Publications family.