Summer is no pool time for this professor 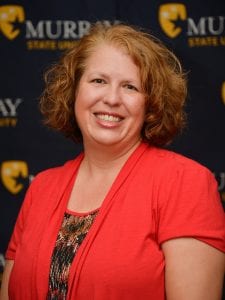 For all those people who think college journalism professors get to spend their summers relaxing by the pool, think again.

Leigh Landini Wright, assistant professor of journalism at Murray State, is spending much of July as an “intern” for WTVF Newschannel 5 in Nashville, Tennessee. Wright received a faculty development fellowship from the National Association of Television Production Executives to spend three weeks in a television newsroom. The fellowship also provides Wright with an opportunity to attend the NATPE conference in Miami in mid-January.

By immersing herself in a newsroom for part of a summer, Wright hopes to bring back current and cutting-edge multimedia skills to use in Murray State’s journalism program.

The NATPE fellowship is not the first time that Wright has returned to a newsroom. In 2013, she was one of six journalism educators selected for the AEJMC/Scripps Howard Visiting Professor in Social Media program. She worked at The Stuart (Florida) News and TCPalm.com for two weeks.

Wright currently serves as a journalism education representative on the KPA Board of Directors. She also holds a membership on the Kentucky Associated Press Broadcasters Board of Directors and is vice president of the Interactive Multimedia and Emerging Technologies division of the Broadcast Education Association.

Prior to teaching, Wright worked at The Paducah Sun as a reporter and section editor.