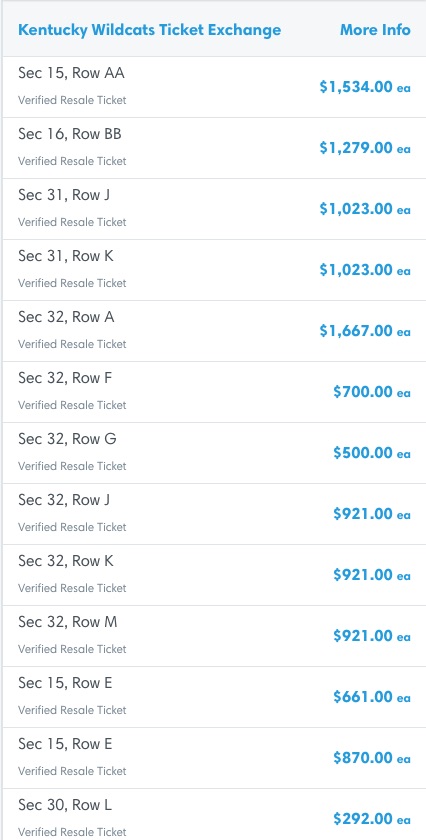 It hasn’t been that long ago that ticket scalpers being taken in by Metro Police in Lexington constituted a big story. It was as if reporters and photographers from newspapers and the broadcast media camped outside Rupp Arena, waiting for the scalpers to be taken in, one by one. Made for good pictures and good stories.

Now perhaps the same thing went on at Freedom Hall and then the YUM! Center for Uof L basketball. And probably any major basketball program anywhere had scalpers outside the arena offering seats at a higher than purchase price.

It’s never difficult to recognize the scalpers, at least around Rupp Arena. In one hand, they hold up an I NEED TICKETS sign. In the other, they’d show 4 to 10 tickets they had for sale.

But notice the last few words in (1) below: “…unless authorized by the issuer or by law.”

Technology has been a huge factor in “legalized” scalping. You’ll never have trouble finding a ticket for a UK basketball though you’ll have to dig deep for each ticket. And a university would be crazy not to authorize this kind of “ticket scalping” for it gets a good portion of the ticket sales price. The university would have already made money when the ticket was originally sold, probably to a season ticket holder. And then if that holder decides to resell the ticket(s), the seller sets the price but agrees to give the issuer — the university — a portion of the sales price.

Just go online to the UK Athletics website and you’ll find tickets for UK basketball games. That was not possible until technology brought a way to do it under a university’s guidance and support. And the tickets will be submitted to you by technology and ready for you print out to take to the venue for admission.

The chart at the right was taken about a week prior to a recent UK basketball game, for the Missouri game, I believe. Here’s a disclaimer on the UK Athletics webpage acknowledging the ‘Verified Resale Tickets’ and that ticket prices may exceed face value. Yeah, with the individual ticket prices shown at the right, I’d say they far exceed face value which would be more in the $80-$85 range for most lower arena seats.

How To Purchase: Verified Resale Tickets

Once again this season, the UK Athletics Ticket Office, in conjunction with its partnership with Ticketmaster, will enable its resale marketplace for all home men’s basketball home games prior to the season tipping off. New this season, fans will be able to purchase officially verified resale tickets at Ticketmaster.com, prior to Kentucky’s public on-sale dates. TicketExchange by Ticketmaster is the only official resale market of UK Athletics. Season ticket holders may use the marketplace to post tickets on a game-by-game basis for which they cannot attend. Please note that tickets posted on Kentucky’s fan-to-fan marketplace may exceed face value. (emphasis added)

(1) A person is guilty of ticket scalping when he intentionally sells or offers to sell a ticket to an event at a price greater than that charged at the place of admission or printed on the ticket, unless authorized by the issuer or by law.

(2) Ticket scalping is a violation.