Ten to be inducted in the Journalism Hall of Fame 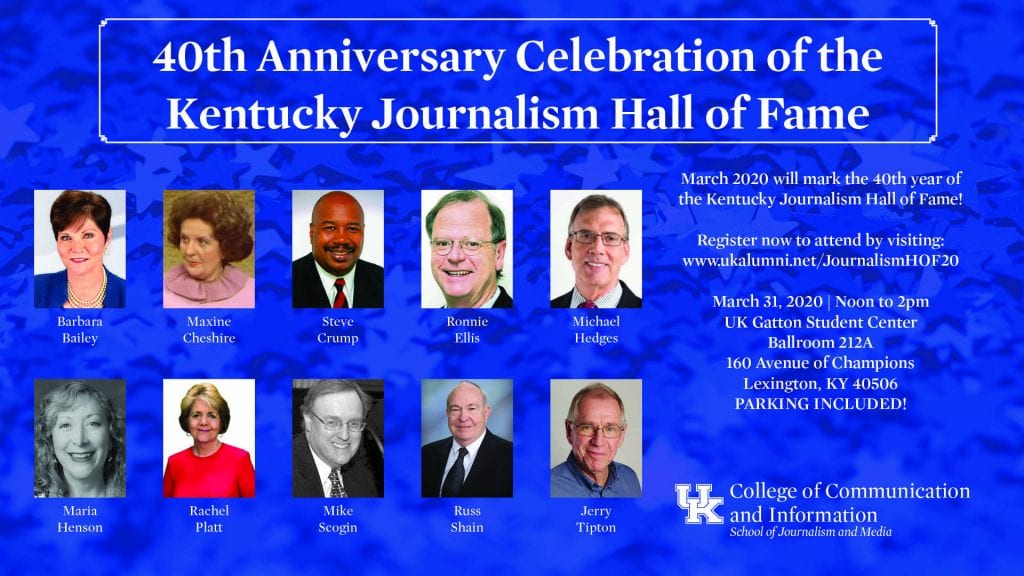 This year’s induction ceremony will be held March 31 at the University of Kentucky.

This year’s 10 inductees are:

In addition to the ten 2020 inductees, Bruce Johnson, who was not able to attend his 2019 induction, will be recognized and presented with his 2019 Kentucky Journalism Hall of Fame award.

Created by the University of Kentucky Journalism Alumni Association in 1981, the Kentucky Journalism Hall of Fame honors achieving journalists who are Kentucky natives or have spent a significant portion of their careers working for Kentucky media organizations. More than 200 individuals, both with and without formal ties to UK, have been inducted into the Hall of Fame. The Hall of Fame is housed in the School of Journalism and Media within the College of Communication and Information at the University of Kentucky.

The 2020 induction ceremony will be held at noon ET March 31 at UK’s Gatton Student Center.

Tickets, which include parking, are $75 per person and $525 per table. For more information, contact UK School of Journalism and Media Project Manager John Cruz at john.cruz@uky.edu or 859-257-3904.

Register to attend at www.ukalumni.net/journalismhof20  and click the blue “registration” button at the bottom of the page.