The good, the bad, the fun, the sad: After some 45 years, Jack Brammer retires from covering state government

Editors Note: Jack Brammer, Frankfort bureau chief for the Lexington Herald-Leader and a member of the Kentucky Journalism Hall of Fame, retired Dec. 30. He had worked for the newspaper since May 1978. 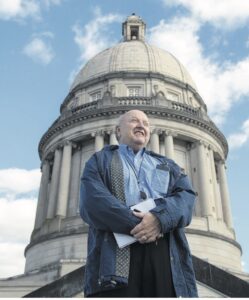 Jack Brammer, on the roof of the Capitol as retirement approached

My mamaw, Bessie Price, often told me as a kid growing up in Mason County about once visiting a relative who had worked in the Kentucky Capitol.

Mamaw, a tenant farmer’s wife who was rarely seen without an apron tied around her except when she was in church, didn’t travel far from home in her life but the journey to the Capitol made a lasting impression on her.

“Oh, my, it’s a grand building,” she would say with a sparkle in her eyes. “I’m not sure if he was a janitor or a repair man. I once visited him there and I thought how marvelous it would be to work there. How blessed that would be.”How marvelous has it been for me to work more than 43 years in Kentucky’s Capitol as a newspaperman for the Lexington Herald-Leader.

I have enough memories of the place to last — and comfort — me the rest of my days.

SPECTACLES IN THE CAPITOL

The Capitol often is the scene of news spectacles with hundreds, sometimes thousands, of people. Remember all the teachers at the Capitol in 2018 and 2019 to advocate for education funding and protest teacher pensions?

The most spectacular events at the Capitol are the inaugurations of governors. I have covered 10 Kentucky governors — from Julian Carroll to Andy Beshear.

Inauguration Day is filled with pomp and pageantry. The morning parades with high school bands marching down Capital Avenue. The dignified swearing-in ceremonies in the afternoon, and the elegant inaugural balls in the evening.

When you see the new governor and first lady (or first husband, as was the case with Dr. Bill Collins when his wife, Martha Layne Collins, became Kentucky’s first and only female governor in 1983) swirl in an embrace about the Rotunda floor to the melodies of a fine orchestra on inauguration night, it’s like seeing a fairy tale come alive.Each Inauguration Day has its own personality.

Certainly no inauguration was like that of Gov. John Y. Brown Jr. in 1979. Brown and his famous wife, Phyllis George, invited a host of celebrities to their celebration. Who could ever forget the Dallas Cowboy cheerleaders in their certainly warm-weather outfits in the middle of December in Kentucky?

FAMOUS PERSONALITIES IN THE CAPITOL

Famous people sometimes visit the Capitol as guests of governors or the legislature.

Heavyweight champion Muhammad Ali came calling. He once held court over a group of reporters outside the governor’s office. Soon the conversation turned to former Gov. A.B. “Happy” Chandler, who, in a meeting of the University of Kentucky’s board of trustees on April 5, 1988 to discuss UK’s decision to dispose of its investments in South Africa, said, “You know Zimbabwe’s all n—– now. There aren’t any whites.”

Chandler’s remark created a national firestorm. Ali questioned the reporters in the Capitol on whether any of them had ever uttered — or even thought — that controversial word.

Other special guests at the Capitol over the years included singer Billy Ray Cyrus leading the Kentucky House in a rousing rendition of “Achy Breaky Heart,” Sally Ride as the first American woman in space, songwriter Tom T. Hall entertaining a group of lawmakers in the Speaker’s office with “(Old Dogs, Children and) Watermelon Wine,” Andy Williams launching into “Moon River,” and actress Jennifer Garner speaking on the Senate floor about a charity for children.

And then there was Victoria Principal, an actress on the TV series “Dallas” that captivated audiences in 1986 when she saw in a scene dubbed “In Her Dreams” her supposedly dead husband in a shower.During a news conference at the Capitol, Principal was asked by a Kentucky reporter if she were going to continue acting.

“In your dreams,” she purred as the reporter (with the initials JB) turned as red as a Kentucky cardinal.

Once, an animal was a guest at the Capitol who became semi-famous. The Newport Aquarium brought to the Senate in October 2013 a penguin that got excited and used the bathroom on the floor next to the desk of then-Senate President David Williams.

My first paragraph of the story summed it up: “A penguin pooped Tuesday on the Senate floor near the desk of Senate President David Williams.”

POWERFUL SPEECHES IN THE CAPITOL

Speeches are plentiful in the Capitol — from State of the Commonwealth addresses by governors to pleas from lawmakers seeking support for their legislation.

Two powerful speeches over the years come to mind. Both were in the legislature. Both changed votes.

One of his finest moments came when he gave a floor speech on a bill to prohibit in vitro fertilization in Kentucky. It is a complex series of procedures used to help with fertility and the influential Kentucky Right to Life opposed it because of the possibility that some fertilized eggs might be destroyed.

Richardson took the lead on opposing the bill. He gave a powerful speech, saying the technology was a wonderful way for a childless couple to become parents. He was successful.

In the late 1980s, many legislators thought AIDS was an affliction of homosexuals.

Belinda Mason changed minds about the disease when she informed House members that she had contracted it from a January 1987 blood transfusion during the birth of her second child.

The daughter of Democratic state Rep. Paul Mason of Whitesburg, who was a strong advocate for the poor, died in 1991 from AIDS.

SAD TIMES IN THE CAPITOL

One of the saddest was in 2012, when Gov. Steve Besher’s chief of staff, Mike Haydon, unexpectedly died of a heart attack at age 62.

The saddest death I know of in the Capitol was in October 1983. Sy Ramsey, Frankfort correspondent for the Associated Press since 1962, was found dead in his second-floor office.

Ramsey, 59, was a mentor. We had roomed together in New York City to cover the 1980 Democratic presidential convention.

PEOPLE IN THE CAPITOL

Oh, the people I’ve met along the way — from governors, other constitutional officers, legislators, judges, state employees from agency heads to janitors, lobbyists and my media colleagues.

Mike Moloney of Lexington was a tough state senator who had little sympathy for state officials who appeared before his budget committee unable to answer questions about their offices’ spending.

One reporter dubbed him but never told him to his face that his media nickname was “the Bobby Knight of the Kentucky General Assembly.”

But that reporter — also with the initials JB — will always be indebted to the senator for being willing to meet with him on Friday mornings in the Annex cafeteria during legislative sessions to talk off the record about politics and government. Those conversations provided good information about the workings of the legislature.

Another favored legislator was House Speaker William Kenton. He was nicknamed “Boom Boom” for his booming voice. He wanted to be governor. He also regularly broke wooden gavels when he pounded them at his desk to get order in the House. Splinters flew everywhere. Maybe our affinity had something to do with both of us hailing from Maysville.

A source of joy has been witnessing so many of my work colleagues in the Frankfort bureau going on to stellar careers. Diana Taylor was chief of staff for Gov. Brereton Jones from 1991 to 1993 and later formed her own successful consulting firm. John Winn Miller became an editor, publisher, screenwriter, indie movie producer and author. Cindy Rugeley is a political science professor at University of Minnesota Duluth. Mary Ann Roser runs a communications consulting company in Austin. Jackie Duke became editor of Blood-Horse Publications. Chad Carlton is president of C2 Strategic Communications in Louisville. Angie Muhs was an executive editor in Maine and Illinois. Jamie Lucke became a compelling editorial writer. Monica Richardson is now executive editor of the Miami Herald. Ryan Alessi teaches journalism and media classes at James Madison University in Virginia. Daniel Desrochers is in the McClatchy news bureau in Washington.

Several of my former Frankfort colleagues still are cranking it out as top-notch news reporters at the Herald-Leader: John Cheves, Bill Estep, Beth Musgrave and Valarie Honeycutt Spears.

Two of my partners in the Frankfort bureau became my bosses: Peter Baniak is editor and general manager of the Herald-Leader and John Stamper is deputy editor for accountability. They always let me state my opinions.My admiration for my Herald-Leader colleagues extends to news people in other media outlets. They have been most tenacious and competitive and I am proud to call them my friends.

We all had a most wonderful building for our workplace.

LIFE WITHOUT THE CAPITOL

I will miss the Capitol, even the late nights in the frenetic final hours of a legislative session. I started working there in my 20s. I leave it in my 70s.

Perhaps a future relative of mine some day will say something nice about his or her next of kin who once reported, pondered, wrote, laughed and cried in the Kentucky Capitol.

I hope that person says of me and the place I worked, “They say he called it a grand building, filled with spectacles and news and, most importantly, interesting people.

“They say he loved that place.”