By Carl Nathe and Mike Ruehling 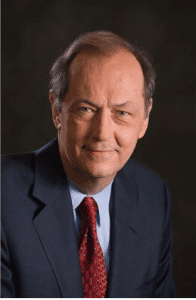 Former Rhodes Scholar, Naismith Basketball Hall of Famer and U.S. Sen. Bill Bradley is coming to the University of Kentucky on Tuesday, Oct.16, as the featured speaker for the Fall 2018 Wendell H. Ford Public Policy Lecture. He’s going to talk about sports public policy issues—such as gambling on college and high school sports.

The event, named for the late former Kentucky governor and four-term U.S. senator, will take place at 3:30 p.m. in the Worsham Cinema in the university’s ​Gatton Student Center. Hosted by UK’s Martin School of Public Policy and Administration, the program is free and open to students, faculty, staff and the public.

Bradley represented New Jersey in the U.S. Senate and served with Sen. Ford in Washington from 1979-1997. Bradley also made an unsuccessful bid for the Democratic Party presidential nomination in 2000.

He presently is a managing director of Allen and Company LLC in New York. Bradley holds a bachelor’s degree in American history from Princeton University and a master’s degree from Oxford University in England.

In addition, Bradley is a former professional basketball player and two-time NBA champion as a member of the New York Knicks (1967-77) and has authored seven books on American politics, culture and the economy. He currently hosts “American Voices,” a weekly show on Sirius XM Satellite radio.

Bradley was in the news earlier this year when the Supreme Court in May struck down as unconstitutional a 1992 law that effectively banned commercial sports betting in most states. Bradley was the legislation’s lead sponsor, helping guide its passage through Congress into law.

“Now in its fifth year, the Ford Lecture is fast becoming one of the premier campus events featuring nationally-known outside speakers with public policy expertise,” said Ron Zimmer, professor and director of the Martin School. “We are excited to welcome Sen. Bradley to campus and look forward to hearing his perspective on a wide range of current issues.”

Bradley, a consensus All-America basketball player for Princeton, has a Kentucky connection. He holds the single-game scoring record of 47 points for the UK Invitational Tournament (UKIT) set in 1963 when Princeton defeated University of Wisconsin 90-87 in the third-place game. The UKIT’s last year was 1989.