Time to toss some typefaces

(Ed will be appearing at the 2017 KPA Winter Convention on Friday, January 20. Marriott East in Louisville.)

Some typefaces are just downright strange. Like Curlz. I just can’t bring myself to believe that someone was serious about designing that one.

And there’s Dom Casual. And Hobo. And (of course!) Comic Sans.

You never…ever…use any of those typefaces. Right?

Ah…but I’ll bet some of you are still using Times. Or Helvetica. Maybe New Century Schoolbook. Or Franklin Gothic. If so, you really need to toss those and go with something better. I’ll have some suggestions in a coming column. 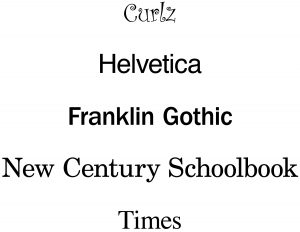 Just a few of the typefaces you should toss

Here’s a list of 20 typefaces (actually, 16 typefaces and 4 complete groups) I’d toss, along with a few words why:

Avant Garde: Designed in the 1960s. That was more than 50 years ago. Not so avant garde now.

Chancery: Is there any place in your newspaper were Chancery is appropriate?

Comic Sans: The target of a lot of jokes. Deservedly so.

Dom Casual: I can’t even think of a schoolroom poster where this would make sense to use.

Helvetica: A darling of designers for decades. But it has been soooo overused. It’s a dead horse. Stop beating it.

Hobo: A cousin of Dom Casual…and just as silly.

Franklin Gothic: Designers jumped on this typeface in the 80s as an attractive alternative to Helvetica. Then they rode this horse ’til it, too, collapsed and died.

New Century Schoolbook: Easy to read for text but too round and takes up too much space. There are better choices.

Papyrus: Designers of menus and movie posters wore this typeface out within a year or two. It’s cliché.

Times: Still a darling of many publishers. But Times (and, yes, Times New Roman) is timeworn. And there are many better choices for text.

Trajan: Another typeface done in by Hollywood. Very classic and very overused.

Blackletter type: Yes, it’s still OK to use Olde Englishe for your nameplate. Nowhere else.

Dingbat fonts: Why clutter your system with junk?

Grunge fonts: Can we puhleeze stop with the angst?

Some of you will disagree, especially about Helvetica and Times. That’s OK. It’s still your newspaper.

Some of you may think there are other typefaces that need to be on the “toss list.” Send me a quick email at edh@henningerconsulting.com and I’ll do a follow-up.

ED HENNINGER is an independent newspaper consultant and the Director of Henninger Consulting. On the web: www.henningerconsulting.com. Phone: 803-327-3322.