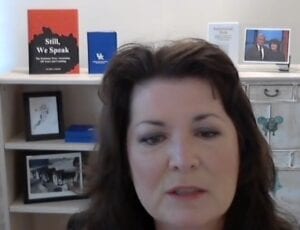 Dr. Erika Engstrom was introduced Tuesday during a virtual reception as UK’s Director of the School of Journalism and Media.

The University of Kentucky College of Communication and Information held a virtual reception Tuesday evening to welcome Dr. Erika Engstrom, the new director of the School of Journalism and Media.

CCI Dean Dr. Jennifer Greer discussed the background of Dr. Engstrom and introduced members of the search committee before turning the screen and microphone over to Dr. Engstrom who gave participants her vision for JAM.

Her Zoom background included a copy of “Still, We Speak,” John Nelson’s book celebrating the first 150 years of the Kentucky Press Association.

A former television news writer and radio anchor, she taught courses in gender and mass media, intercultural communication, and broadcast journalism. During her time at UNLV, she also served as the associate dean of the Greenspun College of Urban Affairs and as acting general manager of the university radio station, KUNV-FM. Her publications include five books and numerous book chapters, encyclopedia entries, and research articles on mass media topics. She earned her B.A. in radio-television and M.A. in communication from the University of Central Florida and her Ph.D. in mass communication from the University of Florida.