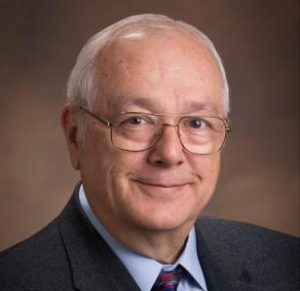 Mike Farrell, co-founder of the Kentucky Center for Public Service Journalism and a distinguished journalist and educator, died Wednesday afternoon after a long illness in hospice care at Rosedale Manor in Covington.

Farrell — James Michael Farrell — was on medical leave from the University of Kentucky where he was serving as interim director of the School of Journalism and Media. He was an advisor to KyForward and the NKyTribune and served as special projects editor.

He is survived by his wife, Marsha, their two grown sons, David and Jonathan, and eight young grandchildren.

“Mike Farrell was a great friend and colleague to the end,” said Judy Clabes, editor and publisher of the NKyTribune. “He was my rock at The Kentucky Post and my ballast through the creation of the Kentucky Center for Public Service Journalism, KyForward.com and the Northern Kentucky Tribune.

“He was also a man of great faith who was devoted to his family — and loved those grandkids. These last few months as his illness progressed have been very hard on his family.”

Farrell suffered from diabetes and other issues and recently had a hip replacement. Several successive falls put him in Rosedale Manor for rehabilitation. His condition deteriorated and he spent the last few weeks in hospice care.

“The man was incredible in his graciousness and kindness and compassion, but also in his deep knowledge and love for journalism and for students,” said Jay Blanton, UK director of public relations and marketing and a friend of Farrell’s, “He believed deeply in journalism and the fact that it was a calling. And he believed deeply in students and in trying to get students to take up that torch.”

A Covington native who still lived in the Latonia neighborhood where he grew up, Farrell had a distinguished career in journalism, having served as a reporter, city editor and managing editor of The Kentucky Post for nearly 20 years.

When The Post closed, he decided to earn his doctorate in communication at the University of Kentucky. His dissertation on the First Amendment reflected his abiding commitment to freedom of expression principles which, on his watch, helped earn The Kentucky Post team a Scripps Howard National Journalism Award for Distinguished Service to the First Amendment. His doctoral dissertation was on the state of the First Amendment in Kentucky.A Covington native who still lived in the Latonia neighborhood where he grew up, Farrella distinguished career in journalism, having served as a reporter, city editor and managing editor of The Kentucky Post for nearly 20 years.

As a tenured professor in the UK School of Journalism and Media, he taught reporting, journalism history, journalism ethics, and media law and was honored nationally as an outstanding adviser.

He was the director of the Scripps Howard First Amendment Center, which is housed in the UK School of Journalism.

“Mike truly loved teaching,” said Clabes. “Just a few weeks ago, he was still hoping to return to it. He made a terrific impact on his students, just as he made an impact on his community as a journalist and a citizen.”

He was a consultant on the development of KyForward.com and was active in the Society of Professional Journalists, serving on the Ethics and Freedom of Information committees. He was a founder and board member of the Kentucky Center for Public Service Journalism, established in late 2013. KYPSJ is the publisher of both KyForward.com and NKyTribune.com.

Services are pending but will be held at Calvary Baptist Church in Latonia where he was an active member and leader and taught Sunday School.