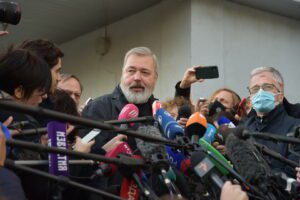 As Dmitry Muratov, editor-in-chief of Novaya Gazeta, greets well-wishers in Moscow after winning a share of the 2021 Nobel Peace Prize, UK journalism professor Buck Ryan was working with a Russian colleague to line up an exclusive interview with him. (Photo courtesy of Novaya Gazeta)

When news broke on Friday morning, Oct. 8, that a Russian newspaper editor was sharing in the Nobel Peace Prize, a UK journalism professor sent a Facebook Messenger note to a colleague in Russia: “Do you know Mr. Muratov?”

Dmitry Muratov, editor-in-chief of Novaya Gazeta (New Newspaper), based in Moscow, is sharing in the 2021 Nobel Peace Prize with Filipino journalist Maria Ressa, who has been arrested multiple times in her battles with the Philippines government.

The Messenger question posted at 8:34 a.m. was answered quickly by Oksi Lantt, a multimedia producer and innovative educator based in St. Petersburg, Russia: “He is the most respected editor in Russia. I’m not sure he remembers me, but my students worked and work with him.”

Less than an hour later Lantt messaged, “Got his mobile number,” and then told Ryan she had set up an interview for four hours later. “So we need to maestro the article,” she said. 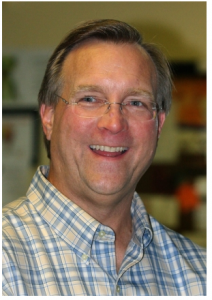 To “maestro” is to make sure that the photo-headline-caption-and-lead of an article, which Ryan considers the first four “paragraphs,” hook readers and keep them reading.

“Nobel Peace Prize winner Dmitry Muratov has taken casualties in Russia’s war on the free press. Muratov has lost 6 staffers to murder since ‘93. He will give the award money to charity.”

And here’s the lead:

How exactly does a newspaper editor win a Nobel Peace Prize and live to tell the tale?

First, you survive a war, then you get to tell everyone your own breaking news with a headline like this packaged with a newsroom photo on the paper’s website:

“The whole Novaya Gazeta and everyone who worked and works there. Alive and dead. This is their prize.”

Ryan is pleased with the response to his article co-authored with Lantt that provided the Poynter Institute with an exclusive interview.

“These days you measure success by likes and retweets,” Ryan said. “There are many of those, but when you get retweeted by PolitiFact, home of the Truth-O-Meter, you can declare victory. One comment on a retweet struck me: ‘Talk about brave.’”

Ryan began his professional relationship with Lantt 12 years ago when he organized the Kentucky wing of a 2009 U.S. media tour for her, other Russian journalists, a Russian journalism professor and a translator.

They were based at UK’s School of Journalism and Media, and they returned the favor by inviting Ryan and a journalism school colleague, Kakie Urch, to do workshops in their homeland.

On a 12-day trip to Russia in June 2010, Ryan taught his Maestro Concept approach to story planning in three Russian cities, including presentations to the Russian Union of Journalists in Kirov, the Press Development Institute-Siberia in Barnaul, and the Association of Independent Regional Publishers in Rostov-on-Don.

In April 2013, Ryan was invited to Lyon, France, to recap his work with Russian journalists and journalism professors over three years at a weeklong conference organized by the International Research Exchanges (IREX), based in Washington, D.C.

In 2014, following a stint as a visiting professor at Lomonosov Moscow State University, Ryan co-authored an article, “Civic arms race: To Russia, with love for young voters,” with a senior lecturer at the university’s journalism school.

Their article focused on the rise in popularity of Moscow mayoral candidate Alexei Navalny, now in prison and recognized by Amnesty International as “a prisoner of conscience.”

Ryan’s last visit to Russia came in September 2016 during the U.S. presidential election race when he taught the Maestro Concept to investigative journalists in Russia on a two-week trip that took him to four cities (Moscow, Novosibirsk, Yekaterinburg and Krasnoyarsk) across three time zones.