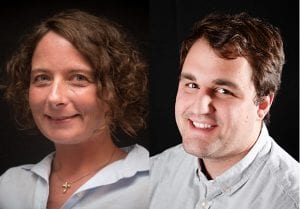 Bergeron is leaving to become editor of the Salisbury Post, a daily newspaper in North Carolina and an affiliate publication of The State Journal. Veno, who will be the first woman in The State Journal’s history to lead the newsroom, has served previously as news editor. In her new role, she will be responsible for news content of The State Journal, State-Journal.com and FRANK. magazine.

“Chanda brings a terrific combination of passion, institutional knowledge of Frankfort, and experience in community journalism,” President and Publisher Steve Stewart said Thursday in announcing Veno’s appointment to the newspaper’s staff. “We are blessed to have her lead our newsroom and succeed Josh, one of the most talented and committed young journalists I’ve had the privilege of working with.”

Veno started in the newspaper industry with a morning paper route of 75 homes in her teens. She covered sports on a part-time basis for the same local newspaper, The Cumberland Times-News, while in college at Frostburg State University, and was offered a full-time job three months later, while still in college.

Two years later, Veno accepted a job at a newspaper in Ashland, Ohio. While there, she met her husband, Mike, and chose to move to Frankfort after falling in love. She has lived in Frankfort for almost 17 years and worked in Owenton, Lexington, Anderson County and as a stay-at-home mom before joining The State Journal.

“I am excited to lead our talented team of journalists and look forward to continuing The State Journal’s longstanding tradition of quality community journalism,” Veno said. “I am passionate about this community and am honored to serve in this new position.”

Bergeron joined The State Journal as managing editor in October 2017 after more than three years as a reporter and associate editor at The Salisbury Post, the newspaper to which he will return this month as editor. Before that, he worked as a news reporter at The Selma Times-Journal in Alabama and The Natchez Democrat in Mississippi. Bergeron received his degree in journalism from Louisiana State University.

“I’ve enjoyed my time as managing editor of Your Hometown Newspaper tremendously and believe The State Journal is in good hands with Chanda,” Bergeron said.

The State Journal and Salisbury Post are affiliates of Boone Newspapers Inc., of which Stewart is senior vice president. The State Journal was named the state’s best midsize daily newspaper in the Kentucky Press Association’s 2017 Excellence in Kentucky Newspapers contest.