‘We have to fight back’: Newspapers fight governments over notices 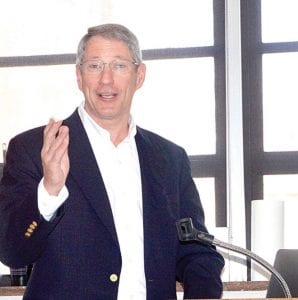 By Samantha Walden, The Mountain Advocate

“Our job [as an organization] is to work for you and our very reason to exist is to keep you informed,” said Jay Nolan, president of Kentucky Press Association (KPA) and publisher of Mountain Advocate Media. “If we don’t have your support, we will lose to political interest.” His comments came as he addressed the Knox County Chamber of Commerce last week.

Nolan gave a presentation explaining why public notices should remain in newspapers rather than government websites. He posed, if the government can control your access to the news, “So, what is coming next?”

“KPA has decided: we have to fight back,” Nolan said. “We have to stand up for you so you get the access you need.”

Newspapers are understood as the best medium to notify the public about government actions. They contain the essential elements of a public notice: accessibility, independence, verifiability, and archivability. Through newspapers, you are given the freedom to access accurate information anytime.

Requiring independent third-party newspapers to ensure that public notices run in accordance with law helps prevent government officials from hiding information and withholding important truths from the public. In 2018, Kentucky legislators passed a statute stating that counties with a population over 90,000 may publish their public notices on a government-controlled website. But, Nolan noted the KPA proposes a different solution for this: kypublicnotice.com, a website that contains public notices from every newspaper in the state. KPA covers the cost associated with the public notice website, so it is free for the public to use.

Nolan urged members to visit the website and “support your local newspaper.”