When it comes to Public Notice legislation, Kentucky is not an island

Bills have been introduced in at least seven states so far this year that would move most public notice from its traditional home in newspapers to lightly visited government websites. And at least of few of those bills were introduced by legislators who have had fraught relationships with the newspapers that cover them. 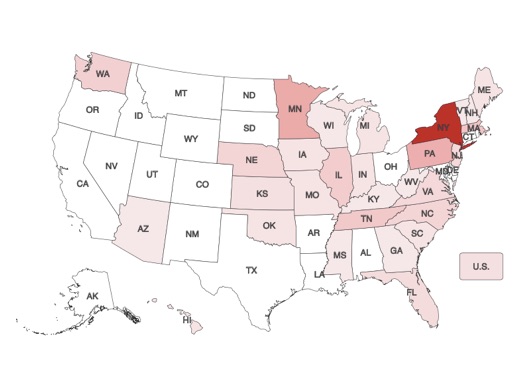 The states that appear at present to face the greatest potential peril — Florida, Kentucky, West Virginia and Missouri — have all been down this path before.

The map at the left is found here — https://www.pnrc.net/subscribers/public-notice-legislation/current-legislation-map/ — and by clicking on each state, you can find the number of bills introduced in each state affecting Public Notices.

In all, 30 of the 50 states have Public Notice Advertising legislation with a total of 162 bills filed. The only states with one bill are Kentucky, Arizona, Mississippi, Wisconsin, Georgia, West Virginia, Vermont and New Hampshire.

New York with 48, Minnesota with 17 and Pennsylvania at 16 have the most Public Notice Advertising bills before the legislature.

In Florida, Rep. Randy Fine’s HB7 passed out of its second committee last week, largely on party lines. (All Democrats on both committees voted against the bill, and one Republican joined them.) Rep. Fine’s bill would permit government agencies to publish “storable” and “searchable” notices on their own websites or on government cable access channels. It would also require the local publication of an annual print notice, in a newspaper or other publication, publicizing government websites that are publishing notices and indicating that residents may request notices from each agency via mail or email.

It’s the same legislation Rep. Fine introduced in 2019. When the Tampa Bay Times published a full-page ad last April opposing that bill, Fine took to Facebook to respond: “Fake News media is scared.” The 2019 version of Fine’s public notice legislation passed the House and died in the Senate. Newspapers in Florida hope the Senate serves as a firewall again in 2020.

West Virginia HB4025 would move a broad swath of notices to a “State Central Legal Advertising” website maintained by the state auditor. Any Class II or Class III notices requiring multiple publications would be reduced to a single insertion, and the remaining notice requirements would be fulfilled by publication on the auditor’s website.

The legislation was introduced by Delegate Brandon Steele (R-Raleigh) just a few weeks after the release of a Dec. 16 study by the Legislative Auditor’s Office that recommended moving notices to a centralized website managed by the state to save money. According to The Inter-Mountain (Elkins, W.V.), “The bill also appears to stem from a feud between Steele and his local newspaper.” Del. Steele commented on Facebook in December that “(t)he Register-Herald makes over a million dollars a year off your tax dollars (from public notice ads) and they utilize that money to attack politicians they disagree with and support politicians to push a liberal agenda like they did in 2016 by supporting and endorsing Hillary Clinton.”

HB4025 ran into trouble last week after West Virginia Press Association Executive Director Don Smith noted at a hearing that public records he FOIA’ed indicate most county governments in the state more than recoup the money they spend on public notice through publication fees. “Almost every county generates substantial revenue from the publication fees over the costs of the legal ads,” Smith told a legislative committee. After nearly an hour of debate, the bill was moved to a subcommittee to work out some of the issues raised during the hearing.

There might be a rupture in the universe if a year passed without a bill in Kentucky to move public notice out of newspapers. Alas, the cosmos is safe for now because such a bill was introduced on the opening day of the 2020 General Assembly, reports Kentucky Press Association (KPA) Executive Director David Thompson. HB195 would allow local governments to publish notice on their website instead of in a newspaper. It was introduced by Rep. Jerry T. Miller, who is not known as a fire-breather in the Trump mold but has never been a friend of the media.

Miller’s bill is stalled in committee and the associations for cities and counties in the state have indicated they don’t support it, according to Thompson. KPA has two choices, he said: Work out a compromise with the cities and counties, or try to kill the bill now but worry about having to deal with it again at the end of the session if it gets quietly slipped into the budget bill. For now, Kentucky’s newspapers are working on the former approach.

Missouri has also seen its share of bad public notice bills.It will be forced to deal with at least one more in 2020. HB1966 would move newspaper notice in the state to the “front page” of government websites. It would also require the Secretary of State to establish a “Legal Notices Website” so public bodies that don’t have a web presence can publish notices there instead. It’s the same 554-page piece of legislation introduced last year that reached deep into the Missouri code to strike all references to newspaper notice. That version was killed in committee on a 5-2 vote, but this session the bill has a new sponsor — House Majority Whip Steve Lynch (R-Waynesville). Mark Maassen, executive director of the Missouri Press Association (MPA), said Lynch likes newspapers but he was largely motivated to resuscitate the bill by the closure of the Waynesville Daily Guide, which had served the community he represents for 50 years until it was shuttered by Gatehouse in Sept. 2018.

HB1966 hasn’t been assigned to a committee yet, but MPA has been busy in the early stages of the 2020 session working with state officials on other fronts to avoid a recurrence of the political problems newspapers faced in 2018 when Missouri was required by its constitution to spend almost $6 million publishing the full text of all statewide ballot measures in local newspapers. For instance, MPA is supporting HB1814, which would condense annual financial statements that must be published by small counties in the states. The bill’s sponsor, Rep. Peggy McGaugh (R-Carrollton) expressed her appreciation for MPA’s help during a hearing last week.

MPA is also backing SB730, which limits public notice rates by requiring newspapers to offer volume or repeat-buyer discounts, and by mandating that “second and successive insertions” be charged at a maximum of “85 percent of the newspaper’s regular local classified advertising rate.” The bill would also require newspapers that publish notices to post them on a statewide public notice site managed by Missouri newspapers. MPA supported similar legislation last year.

Bills that would move newspaper notice to government websites have also been introduced in the early weeks of this year’s session in Hawaii, New Jersey and Oklahoma. It’s still too early to predict what will happen, but newspaper haters in New Jersey probably blew their shot to eliminate effective notice in the state three years ago when former governor Chris Christie’s late-year gambit went down in flames.

Before we close the books on 2019, we want to offer congratulations to newspapers in Michigan, which managed to help get a bill beefing up foreclosure notices passed and signed by the governor in December. The new statute requires mortgagors to include additional information in the foreclosure notices they publish to help delinquent borrowers understand their rights and to add transparency around the auction process. It seeks to address issues raised by failed lawsuits filed against foreclosure lawyers in the state.