When it’s a slow TV news day, never know where a story will end up

A couple of weeks ago, On Second Thought had the story about the news rack thief in Frankfort, a lady on a bike taking stacks of the State-Journal. Extreme couponing is thought to be the reason she raided various SJ racks for all copies of the paper. 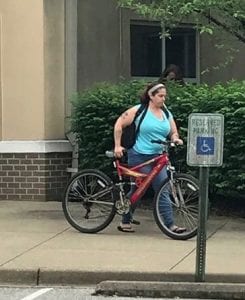 This lady is suspected of taking stacks of newspapers from The State Journal’s racks.

Landscape workers saw what was happening and snapped a picture of the lady near a news rack, walking next to her bike.

Just using the picture and story was publisher Steve Stewart’s aim in hopes of thwarting future thefts from the news racks. And while there apparently have been no arrests, there are some five positive IDs and he’s waiting to hear from the police.

The OST segment included a link to WLEX-TV’s coverage of that news and Steve says it much have been a really slow news day because all three Lexington stations came to Frankfort to cover the story.

But the story got coverage beyond the borders. Steve reports, “A couple of days later, I started getting text messages from buddies in southeast Virginia after a Norfolk TV station picked up the story on what was obviously a very slow news day there as well.