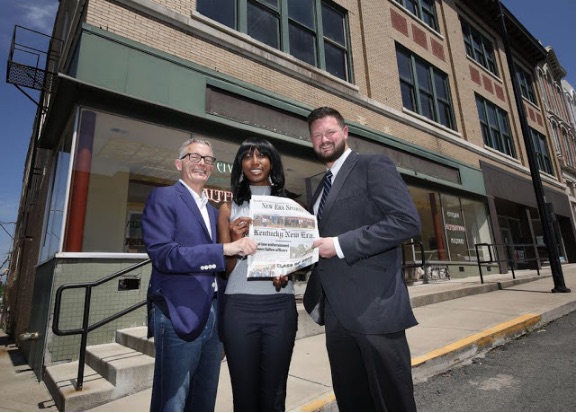 Landlord Hal McCoy, Editor Zirconia Alleyne and Publisher Brandon Cox in front of the building in downtown Hopkinsville that will be the new home of the Kentucky New Era., a daily newspaper. (Photo by Tony Kirves)

All over the country, small daily newspapers no longer need the real estate and buildings they once did, mainly because they have moved their printing to another location, usually in the same ownership group, to save personnel and equipment-maintenance costs.

That happened when Paducah-based Paxton Media Inc. bought the Kentucky New Era in Hopkinsville and moved the printing to Owensboro. The company didn’t buy the newspaper’s real estate, so it’s moving to a downtown building that once housed a J.C. Penney & Co. store and is directly across the street from City Hall. The paper moved from downtown in 1971.

“Publisher Brandon Cox likes the idea of getting closer to the action,” writes Jennifer P. Brown, an online news entrepreneur and former New Era editor whom the paper hired to write up the news. Cox told her, “From an editorial perspective, we support what’s going on in downtown Hopkinsville, and we think we should put our money where our mouth is.” But that took some finagling.

Brown writes, “There was only one available building with a loading dock to handle distribution of the papers when they arrive on trucks around 2:30 a.m. on the New Era’s five publication days. Hopkinsville businessman Hal McCoy made a deal to buy the former J.C. Penney building and will renovate two vacant bays on the main floor. One bay will be for McCoy, who owns and manages several residential and commercial properties in Hopkinsville. The other bay will house the New Era. . . . The news staff will have a view of Main Street through the building’s storefront window.”

“It’s so important, I think, for the local news to be intimately ingrained and connected to the heart of the community it serves,” Cox told Brown. “There’s no better way to do that than to be a part of the downtown.”