Whirlwind week in the Capitol 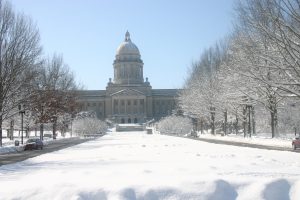 You already know that not since 1920 has the Republican Party been in charge of the House of Representatives. It may have also been that long since the first week of legislative session has been such a whirlwind.

Honestly, the action, the impassioned speeches, the charges and counter-charges of what one side of the aisle was doing to the other, sounded more like the waning minutes of a 60-day session than a new start for Kentucky.

Memory of recent short sessions (remember, it hasn’t been that many years ago that Kentuckians were misled to believe annual sessions would actually help the Commonwealth) is that the first four days got little if anything accomplished. They organized their leadership for both parties, assigned members to committees and might even have one or two of those committees meet during the first week.

This year, bills have been introduced, assigned to a committee within minutes, had a first and second reading, then approved by a committee and headed to the floor for a vote. And the other chamber was waiting like a split end would for a long pass, ready to carry it toward the end zone. Or in this case, a fast track to the Governor’s desk.

And geez, normally it’s not until the last day that a bill on one subject is stripped of its language and a new wording, totally unrelated, put in its place. That only happens when a chamber can’t get one of its prime pieces of legislation passed so it guts a bill, puts in that new language and hopes the other chamber will let it go. Yet it happened in the opening days of the opening week.

Another probable first for this session is that the opening four-day “organizational session” (as those days are referred to) is now a five-day work week. It takes a minimum of five days for a piece of legislation to make it through both chambers. And with a few bills moving swiftly through the opening week, legislators decided to meet on Saturday (January 7) so that those bills can gain approval in both chambers and be sent to the governor while they take their three-week hiatus.

Watching the proceedings in the House each day, I think the Democrats realized the shoe’s on the other foot now. For as long as I’ve been watching the proceedings, I’ve heard the Republicans lament about how they were treated, how they were overlooked, how their views aren’t being considered, how their suggestions to improve legislation aren’t being brought up for a discussion, much less a vote.

This week, the Democrats got the “minority party” title as the reference to its role in the House. And much of their comments throughout the week were identical to what Republican members had been stating for years and years.