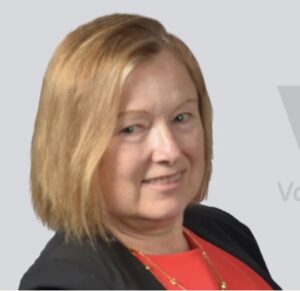 “I am honored by this nomination,” Bennett told VOA late Friday. “If confirmed, I will be so proud to work with all the dedicated journalists at USAGM who are doing the critical and difficult work around the world of upholding and demonstrating the value of a free press.”’

In September 2001, she became editor of The Lexington Herald-Leader, a Knight Ridder paper. Twenty months later on June 2, 2003, Knight Ridder appointed her the first female editor in the 174-year history of their flagship paper, The Philadelphia Inquirer.

USAGM Acting CEO Kelu Chao announced the nomination Friday afternoon in an email to all staff at the independent agency, which oversees journalists from five news networks: the Voice of America, the Office of Cuba Broadcasting, Radio Free Europe/Radio Liberty, Radio Free Asia and the Middle East Broadcasting Networks, as well as The Open Technology Fund.

“We look forward to her congressional confirmation and her arrival!” Chao said. President Joe Biden announced Chao’s appointment as interim CEO on Jan. 20, 2021.

The White House did not immediately respond when VOA sought comment.

Bennett, 69, served as VOA director from March 2016 to June 2020. She stepped down after the Senate confirmed Michael Pack, the last permanent CEO of USAGM, which oversees VOA. He was President Donald Trump’s pick to run the agency.

In her resignation letter, Bennett expressed her hope that Pack would honor a pledge to respect the editorial independence of USAGM journalists that is enshrined in the 1994 U.S. International Broadcasting Act. The so-called firewall prohibits U.S. government officials from interfering in the independent and objective reporting of news, which is a cornerstone of the agency’s international work.

“Michael Pack swore before Congress to respect and honor the firewall that guarantees VOA’s independence, which in turn plays the single most important role in the stunning trust our audiences around the world have in us,” she wrote.

When she stepped down, alongside her deputy, Sandy Sugawara, she explained that “as the Senate-confirmed CEO, he has the right to replace us with his own VOA leadership.”

Pack’s tumultuous seven-month tenure included whistleblower complaints alleging gross mismanagement, a subpoena from Congress and court orders barring him from interfering with the operations of networks and grantees he oversaw. The Government Accountability Office has since recommended that Congress “consider clarifying the firewall in legislation and more.”

If confirmed by Congress, Bennett would inherit some Pack-era controversies at the agency, including an investigation by three independent experts who are reviewing numerous allegations made by staff members against the agency’s previous management.

In her farewell note to employees after leading VOA for more than four years, Bennett highlighted the progress the agency had made in creating competitive digital news outlets in foreign markets and in combating disinformation. She noted in-depth coverage of the stories of women and refugees, and the focus on press freedom around the world.

Bennett was recognized for her “significant contribution to journalism” in a National Press Club Fourth Estate award in 2019.

But she also came under criticism for some decisions during her time as VOA director, including cutting short a planned three-hour live interview with billionaire Chinese exile Guo Wengui in 2017. Bennett removed or disciplined several Mandarin Service employees involved in the interview, provoking legal challenges from them that have since been settled.

And in 2018, she fired 15 members of the Hausa-language service after they were found to have accepted cash from a Nigerian politician.

Before coming to VOA, Bennett was in management at Bloomberg News, The Philadelphia Inquirer, the Lexington, Kentucky, Herald-Leader and The Oregonian, of Portland. Before that, she was a reporter and writer at The Wall Street Journal and The Washington Post.

She shared the 1997 Pulitzer Prize for national reporting with her Journal colleagues, for their coverage of the AIDS pandemic, which included the medical, social and business aspects of the disease.

In 2001, she led a team from the Oregonian to a public-service Pulitzer for “unflinching examination of systematic problems within the U.S. Immigration and Naturalization Service, including harsh treatment of foreign nationals and other widespread abuses, which prompted various reforms.”