Abigail Whitehouse, a former reporter for The Eastern Progress and editor of The Interior Journal in Lincoln County, has been named a member of the 2018 Golden Dozen editorial writers in the Golden Quill contest hosted each year by the International Society of Weekly Newspaper Editors. ISWNE has members in the United States, Canada, England, Scotland, Australia, China and Nepal. 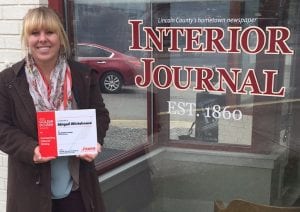 Whitehouse graduated from Eastern Kentucky University in 2012, after earning her bachelor’s degree in English, with a concentration in creative writing. During her time at EKU, she wrote numerous news and feature stories for the school’s weekly newspaper.

In addition to reporting local news, this year Whitehouse started a local produce business, Abigail’s Acres, which is devoted to humane, sustainable farming practices and supporting the local food economy.

Whitehouse’s winning editorial was titled ‘Syringe exchange is imperative to local public health.’ The judge commented, “This empathetic response to the health risks of addiction skillfully balances logical and ethical arguments for the community to support the establishment of a syringe exchange. By pointing out the risks and costs to non-addicts, Abigail combats the tendency of those who aren’t directly affected to view addiction as someone else’s problem.”