By Steven Waldman and Charles Sennott

Shortly after starting as a newspaper reporter in the coal-fields region of eastern Kentucky, Will Wright wrote an alarming article about how residents hadn’t had running water for five days. One woman talked about how her husband’s grandfather could no longer bathe; another said the water hadn’t been safe for a long time: “You turn it on, and it smells like bleach.”

One month later, the man overseeing the troubled water system in that part of Appalachia abruptly retired. Then the state “found” $3.4 million to help fix the problem. 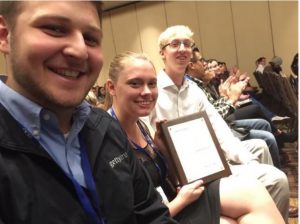 Will Wright, third from left, is shown with Kentucky Kernel staff members Michael Reaves and Marjorie Kirk when they received The Kernel’s Pacemaker Award a couple of years ago.

The articles Wright wrote this year for the Lexington Herald-Leader were not months-long investigations. He attended community meetings in this usually under-covered part of the state and interviewed residents. His articles illustrate an often neglected point about journalism today: The key solution is not technology. It’s having more reporters — a lot of them — on the scene.

Journalism faces many problems. Trust in the press is declining. Americans increasingly turn to partisan sources for information.

The editorial staff at the Denver Post took dramatic steps this past weekend to draw attention to the crisis in community journalism. After another round of severe layoffs were announced, the staff published an attack on its owners, arguing that the private investment firm that controls its newspaper chain had no interest in supporting local journalism. An editorial titled “News Matters: Colo. should demand the newspaper it deserves” included a photo of the staff shortly after it won a Pulitzer Prize for its coverage of the Aurora, Colo., shooting in 2013 — with more than half of the staff blackened out to indicate that they no longer worked there.

This experience is typical. From 1990 to 2016, the number of newspaper employees in the United States dropped from from 456,300 to about 183,000, according to the Bureau of Labor Statistics. Those numbers understate the decline in many areas. For instance, in the 1990s, the San Jose Mercury News, a major newspaper in Northern California, employed 400 union-represented journalists. But in a recent count by the newspaper union, the number of unionized newsroom staffers in the South Bay for Bay Area News Group, which includes the Mercury News, was down to 41.

The crisis in journalism has turned into a crisis of democracy. In concrete terms, what does that really mean?

First, the reporter shortage means residents don’t have the information to make decisions for their families or hold institutions accountable. They don’t know if their schools are underperforming or their mayor is corrupt or their courts are fair.

Residents walk into the voting booth carrying only small shards of information about the local candidates. That is, if they bother to vote. Several studies have shown that voting turnout declines as reporting does.

The paucity of reporters has triggered an invisible power shift toward elected officials. A Pew Research Center study of Baltimore showed an increase in local stories based on press releases from elected officials.

The trends in journalism exacerbate the divide between the coasts and the rest of the country. In 2014, almost 1 out of 5 U.S. reporters worked in New York, Washington or Los Angeles, compared with 1 in 8 in 2004. Isn’t it likely that this contributed to the media missing the two biggest stories of the past few years – the rise of the opioid epidemic in middle America and the political strength of Donald Trump?

In addition, with less local reporting, residents come to understand each other less well. Fellow citizens become caricatures rather than neighbors — and we become more polarized. People rely more on national sources, which tend to be ideologically driven. By contrast, local issues — Why are there so many traffic deaths at Maple and Main? How do our teacher salaries compare with those in the rest of the state? — often cross party boundaries.

Finally, the lack of reporters helps erode trust in journalism. Residents would be less likely to view “the media” as arrogant, ideologically driven miscreants if they see real reporters at school board meetings until midnight, covering nitty-gritty stories of importance to them.

You might think, well, sure — more reporters would be nice. But that’s not going to happen within the commercial model.

Actually, it can happen if we think differently. Let’s consider how transformative a public-service model could be. For instance, Report for America, a nonprofit initiative established last year as part of the GroundTruth Project, recruits talented emerging reporters — like Will Wright — from around the country, and then places them in local newsrooms. Report for America pays half the salary, and the other half is split between the news organization and local donors. News organizations, both commercial and nonprofit, apply to host these corps members. Our goal is 1,000 reporters in the field by 2022.

To underline their public service commitment, the reporters also do volunteer projects — for instance, working in high schools to help with student-run news websites or podcasts.

Implicit in this approach: The nonprofit sector should play a bigger role in local journalism. In 2012, foundations put $2.1 billion into arts and culture but just $36.1 million into investigative reporting.

Whether it’s Report for America or some other model, a sea change is required: Local donors — and the community as a whole — need to view journalism as essential as local libraries, museums and hospitals. It’s not complicated. We need more reporters — not for the sake of journalism but for the health of America’s democracy.