With high school tournaments just around the corner, add the Encyclopedia to your library 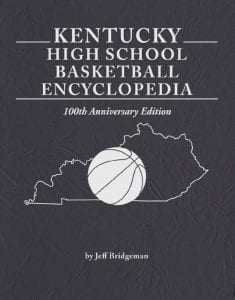 In need of all the facts and figures about Kentucky high school basketball? We’re in the 100th anniversary of roundball in our high schools so there’s a lot of history behind the sport. And there’s a publication — an Encyclopedia as a matter fact — that’s nearly a must for sports editors, writers and aficionados across the state.

Below is a pdf that tells you all about the 768-page book and how to order one for $49.95 plus shipping costs.

Then later in the book is a 77-page section of the complete record of every girls high school basketball team, broken down much the same way, by individual coach and that coach’s record.

That’s quite an undertaking in itself to compile the complete records of every high school fielding a basketball team.