The journalists of WKMS-FM at Murray State University are the winners of the 2021 Al Smith Award, presented for public service through community journalism by Kentuckians.

“We usually think of ‘community’ as one county, town or neighborhood, but there are geographic communities, and there are communities of interest. West Kentucky is a geographic community of interest, and WKMS has the only newsroom that covers the whole region and its interests,” said Al Cross, director of the Institute for Rural Journalism and Community Issues at the University of Kentucky. “It does it well.”

The institute presents the award with the Bluegrass Chapter of the Society of Professional Journalists. Chapter President Tom Eblen, a former Lexington Herald-Leader managing editor and columnist, said “WKMS has a history of reporting important stories in its region accurately, thoroughly and without fear or favor. It is a model for courageous public-service journalism, especially at a time when citizens are looking more to public radio to fill voids left by shrinking commercial media outlets.”

The station was nominated by Constance Alexander of Murray, a columnist and playwright who is on the Institute’s advisory board. She wrote, “With a consistent record of reporting on important events and community issues — and editorial leadership that dares to address controversial subjects and hold power accountable  — WKMS serves the informational, cultural and community needs of the region, exemplifying the values represented by the Al Smith Award.”

The station is being honored for years of work and maintaining its high quality despite getting less money from the university. It has covered its paymasters forthrightly, reporting in 2013 that a quorum of the Board of Regents discussed official business, including an extension of the president’s contract and the station’s funding, at a social gathering the night before its official meeting.

In 2018, the station revealed that a Murray High School teacher’s predatory sexual behavior had been under investigation by the Kentucky Education Professional Standards Board for five years, with no public disclosure. After two suspensions, the teacher resigned.

In 2020, WKMS reported that the Marshall County judge-executive had refused to sign a grant application for more school resource officers after a deadly school shooting, while giving two employees raises totaling nearly $30,000, the amount the county would have had to contribute for the grant if awarded.

In daily and enterprise reporting on the pandemic, WKMS has been “a beacon of information, companionship and understanding in a time when we needed it most,” Alexander wrote. But the station also continued its accountability journalism. Assistant News Director Liam Niemeyer won a regional Edward R. Murrow Award for a story about a Paducah school official who appeared in blackface for Halloween. Rather than make the school official the main focus, Niemeyer framed his story within the context of the larger experience of the Black community in Paducah, giving a richer view of the city’s racial history, and a deeper understanding of why use of blackface by a trusted public official was so hurtful. The story launched an occasional series, “Black Lives in Red States,” that is continuing at Ohio Valley ReSource, a consortium of public radio stations in Kentucky, Ohio and West Virginia. 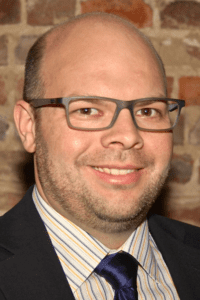 WKMS Station Manager Chad Lampe, who moved up from news director in 2015, said, “I am so incredibly proud of our newsroom and our station staff as a whole. We take an ‘audience first’ approach to all of our work and this is why we remain committed to telling stories that matter. I am particularly proud of our Murray State student journalists who we bring into our newsroom, train and mentor to produce professional news right alongside the work of our staff.”

The station is an affiliate of National Public Radio. “WKMS is unique in our region as our only full-service provider of public media news,” noted Berry Craig, retired history professor at Paducah Community College. “The closest NPR affiliates to Murray are at Southern Illinois University in Carbondale–almost 114 miles north–and Western Kentucky University in Bowling Green, nearly 119 miles east.”

WKMS punches above its weight by partnering with other news outlets in the region, which was once served by the Louisville Courier Journal and occasionally by newspapers based in Tennessee and Indiana.

“WKMS has met the challenge, and then some, to report more deeply on stories about local governments, race relations, education, the environment, culture and the coronavirus pandemic,” said Hoptown Chronicle Editor-Publisher Jennifer P. Brown, a WKMS partner and a previous Smith Award winner.

The award is named for the late Albert P. Smith Jr., who published newspapers in Western Kentucky and Middle Tennessee, was founding producer and host of KET’s “Comment on Kentucky” and federal co-chair of the Appalachian Regional Commission. He was the driving force for creation of the Institute, headed its advisory board and was its chair emeritus until his death in March at the age of 94.

Smith was the first winner of the award. This is the first time it has gone to broadcasters or a news outlet at a university.

The award will be presented at the Al Smith Awards Dinner in Lexington Oct. 28. The dinner was not held in 2020, due to the pandemic, so 2020 winner Becky Barnes, editor of The Cynthiana Democrat, will receive her award at the dinner, too. Winners of the Institute’s national Tom and Pat Gish Award for courage, tenacity and integrity in rural journalism will also be recognized at the event. Details of the event are forthcoming.